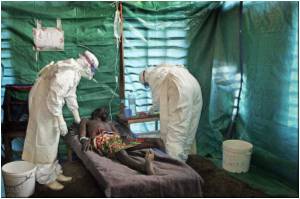 Ebola outbreak in the Democratic Republic of Congo has stabilised, says the World Health Organization.

For the past 10 days, the death toll from the haemorraghic fever has remained at 36 and no new cases have been registered, the WHO said in a bulletin. The last case of hospitalisation dates back to October 11, according to the statement released to the press on Tuesday.

A total of 75 people are believed to have been infected and the fatality rate in the outbreak went to 48 percent.


"We are very, very vigilant," WHO Kinshasa representative Leodegal Bazira told AFP. "It takes just one case to start up a cycle of transmission." The fact that the disease had been confined to the town of Isiro and its neighbourhood was a positive factor, he added.

In the Democratic Republic of Congo an outbreak of Ebola fever has killed up to 36 people, according to new report by the health ministry.
Advertisement
An epidemic was declared in mid-August in the northeastern Orientale Province. But researchers have dated the outbreak back to May.

The ministry of health, the WHO, the Centers for Disease Control based in Atlanta, Georgia, and Doctors Without Borders (MSF) have been working in close cooperation to combat the outbreak.

To date, there is no treatment or vaccine for Ebola, which kills between 25 and 90 percent of those who fall sick, depending on the strain of the virus, according to the WHO.

The disease is transmitted by direct contact with blood, faeces and sweat, by sexual contact and by unprotected handling of contaminated corpses.

DR Congo has recorded eight outbreaks of Ebola, one of the world's most virulent diseases, since the virus was first reported near a Congolese river that gave the disease its name in 1976.

Democratic Republic of Congo may have claimed up to 32 lives including a woman who had just given birth, due to the outbreak of Ebola fever since May said World Health Organisation on Tuesday.
Advertisement
<< In Crucial Swing Unemployment Rate Drops in US States
Brain Scans Help Predict Anti-social Behaviors in Teenage G... >>

Find a Doctor Accident and Trauma Care Vent Forte (Theophylline) Drug Side Effects Calculator Find a Hospital Iron Intake Calculator A-Z Drug Brands in India Sinopril (2mg) (Lacidipine) Blood Donation - Recipients Loram (2 mg) (Lorazepam)
This site uses cookies to deliver our services. By using our site, you acknowledge that you have read and understand our Cookie Policy, Privacy Policy, and our Terms of Use