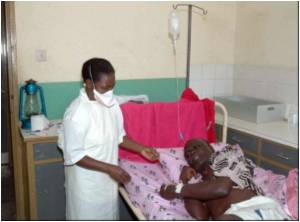 Democratic Republic of Congo may have claimed up to 32 lives including a woman who had just given birth, due to the outbreak of Ebola fever since May said World Health Organisation on Tuesday.

By September 15, "a cumulative total of 72 cases was recorded, including 14 cases that were confirmed positive after laboratory analysis, 32 probable cases and 26 suspected cases, while 32 deaths were registered," the WHO announced in Kinshasa.

The outbreak of deadly Ebola virus appears to be over in Uganda, says the World Health Organization.
Advertisement

A baby born prematurely "in the isolation centre in Isiro (the epicentre of the epidemic in northeastern DR Congo) to a mother infected by the Ebola virus was still alive while his mother died on Saturday," the statement said.


In DR Congo, which has known eight outbreaks of the often fatal haemorraghic fever, it was the first time a pregnant woman had a child, because "Ebola and pregnancy are almost incompatible," Health Minister Felix Kabange Numbi said.

Nine people have died in an outbreak of the deadly Ebola virus in the Democratic Republic of Congo, Health Minister Felix Kabangue said on Saturday.
Advertisement
To date, there is no treatment nor vaccine for Ebola, which kills between 25 percent and 90 percent of patients depending on the strain of the virus. The disease is transmitted by direct contact with blood, faeces and sweat, by sexual contact, and by unprotected handling of contaminated corpses.

According to the WHO, 23 health workers were among the infected people. Five of them died, and 215 people who have been in contact with the sick are under surveillance. The most recent confirmed case of Ebola dates from Friday.

An epidemic was declared in mid-August in Orientale province, but the international committee for the fight against Ebola has carried out research and dated the outbreak back to May.

The ministry of health, the WHO, the Centers for Disease Control in Atlanta, Georgia, and Doctors Without Borders (MSF - Medecins Sans Frontieres) are working in close collaboration to combat the outbreak.

There is a need for greater co-operation between governments, corporate sector and citizens to ensure international preparedness and to provide a universal safety net to deal with global health issues
Advertisement
<< Spread of Kate Pics: A Criminal Act
New Tools Released to Help Track and Prevent Deadly Infectio... >>

Find a Hospital The Essence of Yoga Blood Pressure Calculator Post-Nasal Drip Color Blindness Calculator A-Z Drug Brands in India Sanatogen Drug Interaction Checker Loram (2 mg) (Lorazepam) Turmeric Powder - Health Benefits, Uses & Side Effects
This site uses cookies to deliver our services. By using our site, you acknowledge that you have read and understand our Cookie Policy, Privacy Policy, and our Terms of Use