Ebola Discoverer Claims He Would Sit Next to Victim on Train 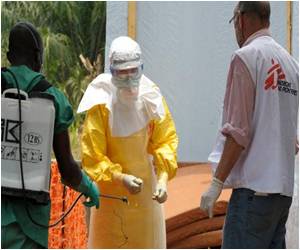 Outbreak of Ebola unlikely to trigger a major epidemic outside the region, says the scientist who helped discover the Ebola virus, adding that he would happily sit next to an infected person on a train.

But Professor Peter Piot told AFP that a "really bad" sense of panic and lack of trust in the authorities in west Africa had contributed to the world's largest-ever outbreak.

The Belgian scientist, now based in Britain, urged officials to test experimental vaccines on people with the virus so that when it inevitably returns, the world is prepared.


Since March, there have been 1,201 cases of Ebola and 672 deaths in Guinea, Liberia and Sierra Leone, according to the World Health Organization (WHO).
Advertisement
Doctors Without Borders (MSF) has warned that the crisis is set to get worse and that there is no overarching strategy to handle the crisis.

Piot co-discovered the Ebola virus as a 27-year-old researcher in 1976.

He is now director of the prestigious London School of Hygiene and Tropical Medicine and was previously executive director of the United Nations' HIV/AIDS programme UNAIDS.

Even if someone carrying Ebola were to fly to Europe, the United States or another part of Africa, "I don't think that will give rise to a major epidemic," he told AFP in an interview on Wednesday.

"Spreading in the population here, I'm not that worried about it," he said.

"I wouldn't be worried to sit next to someone with Ebola virus on the Tube as long as they don't vomit on you or something. This is an infection that requires very close contact."

His insights are born of deep experience in the field, highlighted by his impressive CV and the mementos from around the world that dot his office in London.

Piot helped identify Ebola when the laboratory where he was working in Antwerp was sent a blood sample from a Catholic nun who had died in what was then Zaire and is now DR Congo.

From the blood, they isolated a new virus which was later confirmed to be Ebola.

He later went to Yambuku, a village in Zaire's Equateur province, where an epidemic had taken hold.

"People were devastated because in some villages, one in 10, one in eight people could die from Ebola," he said.

"I was scared but I was 27 so you think you are invincible."

Researchers noticed most of the infections were among women aged between 20 and 30 and clustered around a clinic where they went for pre-natal consultations.

It turned out that the virus was being transmitted through a handful of needles which were being reused to give injections to pregnant women.

There were also a string of outbreaks linked to funerals.

"Like in any culture, someone who dies is washed, the body is laid out but you do this with bare hands, without gloves. Someone who died from Ebola, that person is covered with virus because of vomitus, diarrhoea, blood," he said.

"That's how then you get new outbreaks and the same thing is happening now in west Africa."

He said recent history in Liberia and Sierra Leone was complicating efforts to tackle the deadly virus, which kills as many as nine-tenths of the people it infects.

"Let's not forget that these countries are coming out of decades of civil war," he said.

"Liberia and Sierra Leone are now trying to reconstruct themselves so there is a total lack of trust in authorities, and that combined with poverty and very poor health services I think is the explanation why we have this extensive outbreak now."

Staff are also often poorly equipped with no protective gear or gloves, he added.

While there are a couple of experimental Ebola vaccines and treatments which have shown promising results in animals, these need to be tested on people, he added.

"I think that the time is now, at least in capitals, to offer this kind of treatment for compassionate use but also to find out if it works so that for the next epidemic, we are ready," he said.

"It is quite clear that new viruses will emerge all the time and Ebola will come again -- hopefully not to this extent."

Schools in Liberia Shut in Battle Against Ebola
Shutting all schools and placing "non-essential" government workers on 30 days' leave is the step .....

EU Allocates Additional Funding to Prevent Spread of Ebola Outbreak to Europe
The European Union has swung into action by allocating extra spending after fears grew that the ......

As Ebola Fears Spread, Nigerians Plead for Foreign Help
John Ejiofor, a Nigerian, pleaded the world to help contain the spread of the Ebola virus raging ......