Eating Salmon Enhances Health of Pregnant Women and Their Babies 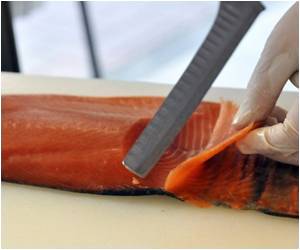 Including salmon in the diet increases omega-3 fatty acid levels and improves antioxidant defences in pregnant women and their babies, researchers have found.

Anemia is the commonest blood disorder that may occur in pregnancy and is usually due to low iron or folate reserves of the body and this is reflected as anemia.
Advertisement

The salmon employed in the study was only slightly contaminated and had been previously enriched with omega-3 fatty acids at a fish farm.


To carry out this study, University of Granada researchers selected a randomised sample of pregnant women with low fish intake.

The sample was divided into two groups: the control group -which continued with their regular diet- and the Salmon group -which incorporated two servings of "treated" salmon from 20 weeks of gestation until term.

Researchers worldwide have discovered that eating fish regularly is good for health. Regular consumption of fish may reduce the risk of diseases such as asthma, prostate cancer and eyesight.
Advertisement
The salmon had been reared in a fish farm under a controlled diet including special ingredients (vegetable oils and food as algae and zooplankton); through this diet, salmon became rich in omega-3 fatty acids and presented high concentrations of antioxidant vitamins -as Vitamins A and E- and selenium; in addition fish contained very low contaminant levels.

Blood and urine samples were taken from the two groups, who were also asked to complete a questionnaire of food habits at weeks 20 and 34 of gestation -which would provide information about food intake during the previous 12 weeks.

The researchers found that omega-3 fatty acid concentrations improved when pregnant women who did not frequently eat fish ate two servings of salmon weekly; the same results were obtained for the newborns.

Two servings of salmon per week help the mother and her child reach the minimum recommended omega-3 fatty acid intake.

Additionally, the researchers found that the biomarkers for lipid oxidation and oxidative damage to DNA were not affected by the intake of salmon.

Thus, researchers concluded that eating two servings of salmon a week during pregnancy does not increase oxidative stress.

This improvement in antioxidant defences might help prevent and reduce the additional oxidative stress associated with pregnancy.

Finally, eating salmon reared at a fish farm did not negatively affect pregnant women's antioxidant defences, carbohydrate and lipid metabolism, adipokine and cytokine concentrations and biomarkers for vascular homeostasis in the newborns.

Pregnancy is a time when a female blossoms into a woman with an experience never felt before. Here are a few self-care tips for pregnant mothers that will help them during their pregnancy.
Advertisement
Advertisement

All healthy foods will give you great skin, but some of them are better than others for a glowing face and ...
This site uses cookies to deliver our services.By using our site, you acknowledge that you have read and understand our Cookie Policy, Privacy Policy, and our Terms of Use  Ok, Got it. Close
×