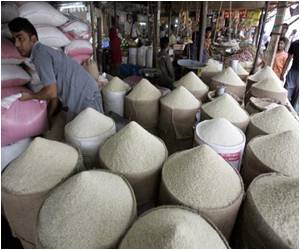 "Our results show that adults who eat rice had diets more consistent with what is recommended in the U.S. Dietary Guidelines, and they showed higher amounts of potassium, magnesium, iron, folate and fiber while eating less saturated fat and added sugars," said Nicklas. "Eating rice is also associated with eating more servings of fruit, vegetables, meat and beans," she added.

Americans enjoy some 27 pounds of enriched white and brown rice per person per year with the majority (70%) of rice consumption coming from enriched white rice. Americans eat a variety of grain-based foods, but rice stands out because it is eaten primarily as an intact grain that is naturally sodium free and has only a trace amount of fat, with no saturated fat. Consumers can control adding fat, salt and flavors at their discretion.


This research builds on two previously published studies that showed the positive contribution of rice to diet quality. A 2009 observational study using NHANES datasets and Continuing Survey of Food Intakes by Individuals (CSFII), found that rice eaters consumed significantly less fat and saturated fat and consumed more iron, potassium, fiber, meat, vegetables and grains.2 A follow-up study in 2010, also using NHANES datasets, included children in the study group and further confirmed that rice consumption was associated with greater intake of a range of healthier foods and nutrients.3 The majority of rice consumed is white rice, indicating that rice, when consumed with other foods, such as fruit, vegetables, meat and beans, can provide valuable nutrients and boasts beneficial effects on consumer diets.
Advertisement
"These studies taken together demonstrate that if you focus on eating the right combination of foods, it will help Americans get closer to meeting their nutrient needs. The key recommendation of the Dietary Guidelines is, after all, that our goal should be to aim for a healthy eating pattern. These studies show that rice eaters are doing this," said Anne Banville, vice president of the USA Rice Federation.

In addition to the positive results in cross-sectional studies linking rice consumption with healthier diets, a human clinical trial found that having white or brown rice at a meal increased satiety and feelings of fullness more than a calorically equivalent glucose solution control.4 Considering the cross-sectional and clinical findings, both enriched white rice and whole grain brown rice should be recommended as part of a healthy diet.

Rice is a Nutrient-Rich Carbohydrate Rice is a quality carbohydrate. Rice is a naturally nutritious grain that provides about 100 calories per half-cup cooked serving and is naturally free of gluten. Brown rice is a 100% whole grain food and white rice is enriched with important nutrients, including folic acid and iron.

Both enriched white rice and whole grain brown rice are considered nutrient-rich quality complex carbohydrates and can be part of a sustainable, plant-based diet that promotes optimal health. Enriched white rice contributes more than 15 vitamins and minerals, including folate and other B vitamins, iron and zinc to the diet. Brown rice is slightly higher in dietary fiber, magnesium and phosphorus, but lower in B vitamins and iron than enriched, fortified white rice. Rice is naturally low in sodium and cholesterol free and contains traces of fat and no saturated or trans fats.

Rice Bran Oil
Rice bran oil is a unique cooking oil and has been in existence since quite some time now. ......