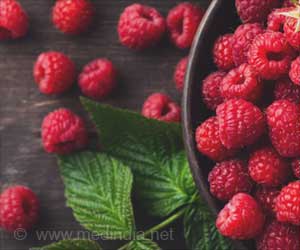 Including red raspberries in the diet can benefit people with pre-diabetes and insulin resistance, reports a new study. The findings of the study are published in the journal Obesity.

According to the Centers for Disease Control and Prevention (CDC), an estimated 34 percent of American adults, around 84.1 million in all, had prediabetes in 2015. Patients with prediabetes are at higher risk for a number of conditions - including developing type 2 diabetes, cardiovascular disease and Alzheimer's disease.

Advertisement
‘Regular consumption of red raspberries can help pre-diabetic people slow or reverse the progression of the disease as raspberries are not only rich in micronutrients but also have anti-diabetic properties.’
Read More..

The study investigated the effects of red raspberries in a group of people at risk for diabetes who were overweight or obese and presented with prediabetes and insulin resistance. A metabolically healthy control group was also included in the study for reference.


Using a randomized, controlled, acute study design, 32 adults between the ages of 20-60 years had their blood tested over 24 hours after eating breakfast on three separate days. The three breakfast meals were similar in calories and macronutrients, but differed in the amount of frozen red raspberries - one meal contained no raspberries, one contained one cup of raspberries, and one contained two cups of raspberries.
Advertisement
The results showed that as the amount of raspberry intake increased, individuals at risk for diabetes needed less insulin to manage their blood glucose. When two cups of red raspberries were included in the meal, glucose concentrations were lower compared to the meal with no red raspberries.

The data suggest that simple inclusion of certain fruits, such as red raspberries with meals, can have glucose lowering benefits with indications of improvements in insulin responses. These effects are particularly important for people who are overweight or obese with pre-diabetes.

"People at risk for diabetes are often told to not eat fruit because of their sugar content. However, certain fruits - such as red raspberries - provide not only essential micronutrients, but also components such as anthocyanins, which give them their red color, ellagitannins, and fibers that have anti-diabetic actions," said Britt Burton-Freeman, Ph.D., director, Center for Nutrition Research at Illinois Tech.

"For people who are at risk for diabetes, cardiovascular disease, and other health risks, knowing what foods have protective benefits and working them into your diet now can be an important strategy for slowing or reversing progression to disease."

Increasing the Diversity of Different-Colored Raspberries
In US, raspberries are the third most popular berry. Their popularity is growing as a specialty ......