Eating Goji Berries Could Protect You from Flu 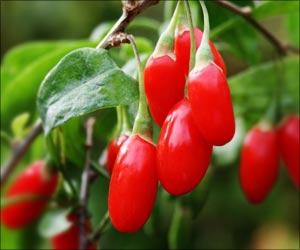 A new study of older mice revealed that a diet that incorporates goji berries which is also known as wolfberries combined with influenza vaccine reduces the risk for flu virus.

The study was conducted with older male mice, aged 20-22 months, by feeding them with either a control diet or a 5% goji berry diet for 30 days. During this period they were also vaccinated twice with flu vaccine prior to the infection of flu virus.

Several weeks later the mice were tested for certain flu antibodies and were assessed for symptoms of the infection and weight loss. There was higher antibody response and less weight loss in the mice that were fed the goji berries, compared with the control group that only received the vaccine.


Senior author Dr. Simin Nikbin Meydani, director of the USDA HNRCA at Tufts University, said " while previous studies have shown that wolfberries booster immune response in mice, our results introduce their potential to reduce the age - related and severity of the flu virus in the presence of the vaccine."
Advertisement
In addition the team isolated dendritic cells - immune cells that activate T-cells to fight infections - and treated them with a goji berry concentrate. After one week of incubation they found that this concentrate "enhanced maturation and activity of antigen-presenting dendritic cells," which basically suggests an enhanced immune response.

The team said that the interaction between goji berries and the flu vaccine is exciting but they are still not clear on which elements of the berries actually produce this interaction and more research needs to be done to confirm if goji berries would have similar effect in human. "People's immune systems inevitably weaken with age, making them less responsive to the vaccine and more susceptible to the flu and its potentially serious complications," Dr. Meydani adds.

He notes that although the flu vaccine is recommended especially for older people, it is only "40% effective in protecting older adults against flu infection," which he says is significantly lower than in younger people.

"For those reasons," Dr. Meydani says, "it is important to investigate complementary approaches that may enhance the effectiveness of vaccination."

This study was published in Journal of Nutrition .

More News on:
Swine Flu Acai Berry - Does It Really Work? Berries for a Healthy and Beautiful You Fat-Burning Foods for Men Health Benefits of Goji Berries

Chinese Fruit Could Improve Vision Deficiencies In Diabetics
Wolfberries from China could help improve vision deficiencies common in type-2 diabetics, a US ......