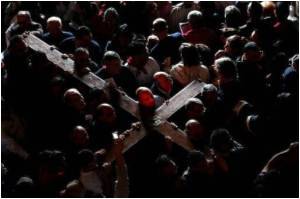 In Bulgaria after communism, Bulgarians attend Easter mass without any fear. During the communist era many people stayed away from church in order to avoid sanctions.

With the militant atheism of the communist era behind her, Zabova is proud to be in her third decade as a bell ringer at Sofia's Alexander Nevski cathedral.

The octogenarian, who has also sung in a church choir since 1943, is living testimony to Bulgaria's ambivalent attitude to religion over the past century.


While Bulgarians now attend mass without fear, especially during religious holidays, during the communist era many shunned the church to avoid sanctions.

A new film about a panic-prone pope who needs a psychoanalyst has divided Italy's Catholics, with a call for its boycott coming from the pages of an influential bishops' newspaper.
Advertisement
Zabova refused to stay away and suffered the consequences.

She was thrown out of the Komsomol -- the organisation of young communists in which all young Bulgarians were automatically enrolled -- in the early 1950s, a move that identified her as an "enemy of the people."

Educated at a Catholic school, her comfortable life was turned upside down by the arrival of the Soviet army in 1944.

Her religion also caused her to lose several jobs after she became a maths professor.

"As soon as my school director was informed by agents who monitored the churches, I was expelled, even though I wore a beret or a wig (to go to church) so I would not be recognised."

A traditionally Orthodox country -- over 80 percent of the population belongs to the church -- Bulgaria remained officially so after the communists took over in 1944.

But the faithful dwindled, coming to be mainly made up of the elderly, as those who worked or studied could be penalised for attending mass.

Under communism, "only about 20 people dared to go to Easter mass," Zabova recalls.

Her husband Ivan Petrov, whom she met in church, also suffered under the communist regime, unable to travel abroad to perform as an opera singer, despite offers from France and the United States.

It was only in 1972 that the authorities let him travel to Germany, albeit without his wife and three daughters.

Now, however, Maria Zabova looks forward to the crowds that converge on the church ahead of Easter, beckoned by her bells.

"After the end of communism, people turned to the Church spontaneously and en masse, looking for a (moral) guiding light," notes Angel Angelov, a priest at Saint Sofia, the capital's oldest church.

"People come to church to seek the truth, to escape the horrors of daily life," he said.

At midnight on Saturday, the Alexander Nevski cathedral will be packed, while tens of thousands will gather in the square outside, waiting for Patriarch Maxim to proclaim "Christ has risen."

The mass, attended by the president, the prime minister and the parliament president, is even broadcast live on radio and public television.

Of course, "many who go to church just come to show off their new clothes, they don't even know how to cross themselves," Zabova criticises, deploring the lack of religious education among young people.

Nethertheless, she will ring the bells this Sunday as one who has known a time when she could not openly practise her religion.

"Ringing the bells is an indescribable emotion and I still haven't got used to it," she says.

A big moment for Maria Zabova was the return in 1997 of former king Simeon II from 50 years in exile.

"I rang the bells for three-and-a-half hours," she says proudly.

Tall and thin -- not hunched by age -- she nimbly climbs the 200 steps to the cathedral's belltower, wearing only a short jacket and no hat despite the strong wind.

Slipping on thick gloves, she seizes the ropes that move the 10 bells -- the heaviest weighs 12 tons -- and seems to dance to their rhythm.

"I don't feel heat, nor wind, nor hail. I live without medical drugs: God protects me," she says with a smile.

Green iguana, slider turtles and the world's largest rodent, capybara: it's not a trip to the zoo. It's what's for traditional Easter dinner in Colombia. This is the season we have
Advertisement
Advertisement
This site uses cookies to deliver our services.By using our site, you acknowledge that you have read and understand our Cookie Policy, Privacy Policy, and our Terms of Use  Ok, Got it. Close
×