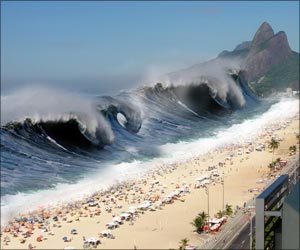 An earthquake of 6.8 magnitude hit the Pacific coast and has caused a minor tsunami near the Fukushima nuclear plant. Japan's Meteorological Agency said that the earthquake struck approx. 10 kilometres below the sea surface off the coast of Fukushima. It happened at 4:22 a.m. and it shook buildings in Tokyo which is about 193 kilometres northwest of the epicentre.

According to the Japan Times, there was no reported damage after the Earthquake and Tsunami.

The Meteorological Agency reported that the tsunami was observed to be 20 cm (7.8 inches) in Miyagi Prefecture, Ofunato, Ishinomaki, and Iwate Prefecture.


The city of Soma also witnessed 10 cm waves roughly 40km north of the Fukushima No.1 plant.

The report mentioned that at least three people have been injured.
Advertisement
A meteorological agency official said that the tsunami was the result of the massive March 2011 earthquake.

The coastline had still not recovered from the 2011 tsunami and quake that had killed 18,000 people and had triggered a disaster at Fukushima No.1 plant.

A Tokyo Electric Power Company spokesman said that they had not seen any damage in radiation gauges after the earthquake. They had asked workers to vacate to higher places.

Powerful Earthquake Jolts Chile
The northern coast of Chile was struck with an 8.2 magnitude earthquake, triggering a tsunami, say ....

Tsunami Evacuation Buildings Being Developed To Save Thousands Of Lives
A series of tsunami evacuation buildings up and down the Pacific Northwest coast, which would help ....