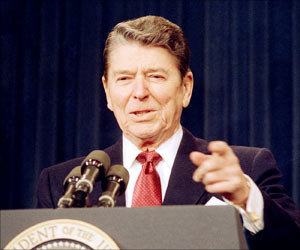 Early detection of Alzheimer's disease and dementia may delay or prevent the progression of the disease.

Researchers at Arizona State University suggest that an effective method of early detection involves analyzing the speaking patterns of those affected with Alzheimer's. The speech patterns of Former U.S. President Ronald Reagan and George H.W. Bush during their terms in office were tracked. Reagan was diagnosed with Alzheimer's in 1994 and died in 2004. It was discovered that Reagan exhibited subtle changes in speaking patterns during his presidency from 1981 to 1989.

Researchers Visar Berisha, PhD, and Julie Liss, PhD, found that Reagan's speech included early signs of Alzheimer's more frequently toward the end of his presidency when compared with Bush. The use of repetitive words, substituting nonspecific terms such as 'thing' for specific nouns, and a declining use of unique words were the notable differences.


An algorithm that analyzed both presidents' press conferences for changes in language, detected Reagan's speech alterations. Berisha said that he was surprised by how quickly the changes in Reagan's speech were detected. "It was surprising that, by analyzing discourse rather than writing samples, similar changes were detectable over the course of two presidential terms."
Advertisement
Early detection of Alzheimer's is key, because "it seems that the future treatments are going to be effective in people where the disease can be detected very early," said Prof. Oscar Lopez, MD, University of Pittsburgh.

Eventually it will be possible in the near future to use this algorithmic method in a doctor's office. Dr. Lopez said, "Our goal is that one day we can develop health applications that automatically analyze speech and language biomarkers for disease onset or progression."

Research Suggests Chronic Stress Linked to Alzheimers Disease
Tau proteins are produced and accumulated in the brain cells due to stress, according to a new ......

Role of Pinocembrin in Treating Alzheimers Disease
Alzheimer's disease is the common cause of dementia. Pinocembrin appears to be a promising drug ......

Antibodies That can Help Effectively Treat Alzheimers Disease Identified
A new study reports on the development of antibody treatments that can prevent the accumulation of ....