Gestational diabetes is a disease affecting up to 7% of pregnant women that can cause babies to develop type 2 diabetes and other complications. A new study has revealed that women who began having menstrual cycles at a younger age are at greater risk of developing gestational diabetes.

Previous research has shown an association between beginning menstrual cycles, or menarche, at a young age and the development of type 2 diabetes. However, the new study, published in Diabetes Care, looked specifically at menarche and gestational diabetes.


"This new finding could mean that doctors will begin asking women when they had their first period to determine their risk of developing gestational diabetes. They may represent a high-risk population and should be targeted for prevention programs," said the study's lead author, Dr. Liwei Chen, an assistant professor in public health sciences at Clemson University. The study was a collaboration between Clemson, the Eunice Kennedy Shriver National Institute of Child Health, the Indiana University School of Medicine and Frank Hu from the Harvard School of Public Health.

Researchers made adjustments for women who reported being obese in adolescence and at age 18, as well as such lifestyle choices as smoking, drinking alcohol, total physical activity and healthy eating, but the results were the same.

"Early age of menarche may represent a novel risk factor of gestational diabetes. Future studies to investigate the underlying molecular mechanisms are warranted," said Dr. Cuilin Zhang, the senior author and a senior investigator of the Division of Intramural Population Health Research at the Eunice Kennedy Shriver National Institute of Child Health.

"Further research in a more racially diverse group is also warranted because 92% of the subjects were white," Chen said. 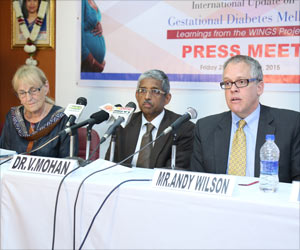 Global Leaders in Diabetes Introduce New Model of Care for Gestational Diabetes Mellitus
The new model of care is a part of the 'WINGS' developed by experts from the International Diabetes Federation, Madras Diabetes Research Foundation, and the Abbott Fund.
READ MORE 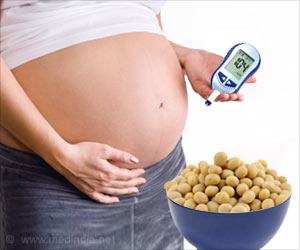 Gestational Diabetic Women May Benefit With a Soy-Rich Diet
Pregnant women with gestational diabetes can consume a diet rich in soy to keep their blood sugar levels under control and reduce complications during delivery.
READ MORE

Gestational Diabetes Risk Early in Pregnancy Assessed in New Test
A new study indicates that levels of a biomarker in a pregnant woman's blood can help physicians gauge her risk of developing gestational diabetes during the first trimester.
READ MORE