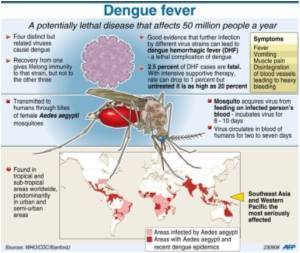 The first precise predictive model to distinguish between dengue fever (DF) and its more severe form, dengue hemorrhagic fever (DHF) has been developed by researchers.

The breakthrough by researchers at the University of Texas Medical Branch, could vastly reduce the disease's mortality rate.

These studies could lead to a personalized approach to treatment of dengue fever.


"We have long known that dengue has many manifestations, from asymptomatic to a flu-like state to a life-threatening condition. If we could figure out early a patient's susceptibility to the deadly form, we could save thousands of lives," said lead author Dr. Allan Brasier, Director of UTMB's Institute for Translational Sciences, with a multidisciplinary team of protein biochemists and bioinformatics specialists developing approaches to personalized medicine - work that will allow doctors to provide better individual diagnostics and treatments for common illnesses.

Encyclopedia section of medindia gives general information about Dengue and Dengue Hemorrhagic Fever
Advertisement
There is no drug treatment for DHF and fatality rates can exceed 20 percent; however, early and intensive supportive therapy - such as transfusions to reduce bleeding complications and organ failure - can reduce the rates to less than one percent.

They found that the cytokine IL-10 (a protein involved in the immune response) and reduced platelet and lymphocyte counts were key predictors of DHF. Further investigation showed that the most accurate model for predicting DHF - effective in 100 percent of the cases studied - was based on IL-10 and seven distinct proteins (tropomyosin, complement 4A, immunoglobin G, fibrinogen and three forms of albumin).

"Until now, biomarkers of the disease have proved elusive. But proteomics technologies are changing the landscape and these studies are the first step toward a personalized approach to treating dengue infection," said Brasier.

For each study, the UTMB Proteomics Center team collaborated with the U.S. Naval Medical Research Unit and practicing physicians in clinics and hospitals in Maracay, Venezuela.

Looking first at the most accessible laboratory and clinical data points, they found that increased concentrations of IL-10, reduced platelet counts and, to a slightly lesser extent, reduced lymphocyte counts are major informative features of DHF - accurately predicting the disease in 86 percent of cases.

Next, multidimensional protein profiling - a more complex and in-depth proteomics analysis - was used to measure cytokines that have been associated with DHF in other studies. The researchers again identified IL-10 as a significant determining factor between DF and DHF. Additionally, seven proteins (out of 42 studied) were shown to be predictive of DHF: tropomysin, complement 4A, immunoglobin G, fibrinogen and three forms of albumin.

Further analysis indicated that any single protein would be a poor differentiator between DF and DHF, but together the proteins were 100 percent accurate in classifying the infection.

"If future research bears out these candidate proteins as firm predictors of DHF, doctors can act early to save lives - the highest hope for personalized medicine," Brasier added.

The study has been published in The American Journal of Tropical Medicine and Hygiene and Clinical and Translational Science.

Mosquito-borne diseases, like malaria, filaria, dengue, etc are common in places conducive of mosquito breeding. Swamps, ponds and stagnated drainage provide optimal breeding ground for mosquitoes.
Advertisement
<< People can Cope Better With Stress If They are Surrounded b...
Smokeless Tobacco Could Reduce Risk of Fatal Disease >>

Iron Intake Calculator Find a Hospital Drug Side Effects Calculator Drug - Food Interactions Blood - Sugar Chart How to Reduce School Bag Weight - Simple Tips Color Blindness Calculator A-Z Drug Brands in India Nutam (400mg) (Piracetam) Accident and Trauma Care
This site uses cookies to deliver our services. By using our site, you acknowledge that you have read and understand our Cookie Policy, Privacy Policy, and our Terms of Use