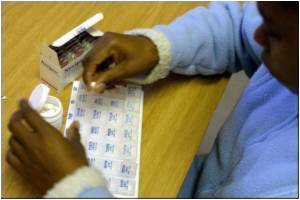 People who are recently infected with HIV may benefit from immediate antiretroviral therapy (ART) in controlling disease progression than deferring treatment, according to a new study.

Christine Hogan, MD, of the Medical College of Wisconsin in Milwaukee, led a team of researchers from various institutions to investigate the effects of ART on individuals infected with HIV-1 within the previous six months. The multicenter clinical trialthe AIDS Clinical Trials Group (ACTG) Setpoint Studyenrolled 130 men and non-pregnant women who were at least 18 years old and had not received ART previously. Participants were randomized into two groups: In the immediate treatment group, patients were to receive ART treatment for 36 weeks, after which treatment was stopped; treatment was deferred for patients in the second group. All individuals were followed throughout the study.

According to Dr. Hogan and colleagues, the results suggest that "if immediate therapy is not begun, progression to meeting standard criteria for ART initiation may occur more rapidly than expected, especially with changing treatment paradigms." In addition, patients who received treatment immediately appear to have been protected not only during treatment but for a brief period of time afterward.

In an accompanying editorial, Harout Tossonian, MD, PhD, and Brian Conway, MD, of the University of British Columbia in Vancouver, Canada, noted that "immune preservation and reduction in the latent pool of HIV-1-carrying CD4 T-cells seems to require intervention at the earliest possible time of acute infection." They noted that the advantages of immediate treatment appear to be achieved with little to no harm to the patient, either in terms of drug-related toxicity or emergence of drug resistance. "The initial course of 36 weeks of treatment may delay the need for re-starting it more than the 36 weeks spent on it from the time of initial presentation," Drs. Tossonian and Conway wrote. "Thus over the lifetime of the patient, there will be less cumulative drug exposure."

Dr. Hogan and her team suggest that the findings may be of interest to clinicians and patients struggling with when to begin ART. An additional sub-study is underway "to address whether immediate versus deferred treatment during primary HIV infection results in improvements in markers of inflammation and immune activation, which may provide further insight into potential benefits of treating primary infection," the authors wrote.