Dysentry Strikes in China After Mudslides 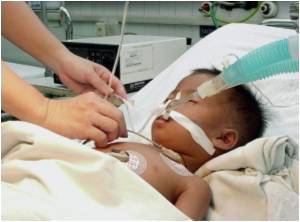 Dysentry has caused about sixty students and teachers of a technical school and others of a town affected by mudslides in northwest China fall ill and be hospitalized, reports state media.

It was not immediately clear how many of those affected in the city of Lanzhou had come from the town of Zhouqu, where 1,700 people were left dead or missing in a huge mudslide.

Amoebic dysentery or amoebiasis is an infection of the intestine that causes diarrhoea most frequently along with other causes.
Advertisement

The disaster in Gansu province had prompted fears of a possible disease outbreak.


Hundreds of students and teachers from Zhouqu were sent to Lanzhou, the capital of Gansu, on Saturday for the start of the school year while damaged classrooms are rebuilt in the remote town, Xinhua news agency said.

New Report on Water, Sanitation and Hygiene Released by WHO

Safer Water for Better Health is the first-ever report providing country-by-country estimates of the burden of disease due to poor water, sanitation and hygiene.
Advertisement
"Some students began feeling uncomfortable Saturday night and the number increased Sunday and Monday. Most of my classmates have been taken to hospital," Yin Teng, a student at the school, told Xinhua.

Gansu vice-governor Hao Yuan said only a few of those in hospital were still suffering fevers and diarrhoea, two of the symptoms of dysentery. If left untreated, the infection can be fatal.

Health authorities were looking into the cause of the illness, the report said.

The rain-triggered torrent of mud and debris that slammed into Zhouqu on August 7-8 virtually split the town in two, levelling an area five kilometres (three miles) long and 300 metres wide.

Authorities had feared an outbreak of water-borne disease, with corpses left unclaimed in high temperatures, residents living rough without proper sanitary conditions and a lack of medical supplies right after the disaster.