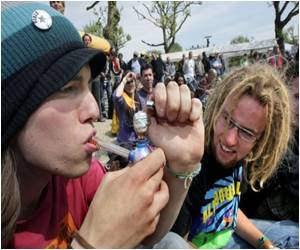 Pro-pot supporters launched a campaign on Saturday against the Dutch cannabis law that restricts the sales of the drug to foreigners. The campaign was aimed at getting citizens to vote for pro-pot parties in elections next month.

Opponents of a Dutch cannabis law that restricts sales of the drug to foreigners on Saturday launched a campaign aimed at getting citizens to vote for pro-pot parties in elections next month.

Organizers said they would travel the nation in an old American school bus, painted silver to convince people to vote for "cannabis friendly parties" in the upcoming parliamentary polls.


The campaign would be funded by 140 coffee shops and two wholesale companies selling cannabis paraphernalia, one of the organizers Marc Josemans told AFP from the southern Dutch city of Maastricht where the campaign was launched on Saturday.

Illicit Drug Trafficking is a global problem. It has certainly 'graduated' from being an 'American malady' to a global nuisance, the world would be best without.
Advertisement
"Today we started a 'cannabus campaign'," said Josemans, a Maastricht cannabis cafe owner and campaigner against the new law.

"It's aimed at trying to convince people to vote in a positive way on September 12." The parties say they would abolish the law if they held political power.

The so-called "cannabis card" law came into effect on May 1 and effectively transforms coffee shops into private clubs as it requires around 80 cannabis cafes in the south to sell only to signed-up members who live in the country.

Its coverage widens nation-wide to 590 other coffee shops in January 2013, and is aimed at curbing drug tourism-linked disturbances.

Left-wing opposition parties -- including the current largest Labor Party (PvdA), the Socialist Party (SP) and the Party for Animals (PvdD) have said they were against the current law.

"We will do everything to get the 'cannabis-card' law off the table," Socialist Party MP Harry van Bommel said in a video interview published on the Dutch pro-weed news site www.coffeeshopnieuws.nl, adding "this law is part of the problem, not part of the solution."

The PvdA in a statement on their website suggested that coffee shops simply be replaced by "cannabis shops", with the sale of marijuana legalized but strictly controlled.

Although cannabis is technically illegal in the Netherlands, the country in 1976 decriminalized possession of less than five grams of the substance under a so-called tolerance policy.

Drug Abuse Screening Test (DAST) is a screening test to find out if you need professional help with 'Drug Abuse' problem. This is only an anonymous self test.
Advertisement
<< Ebola Outbreak Kills Nine in DR Congo
People Infected With Cat Parasite More Likely to Attempt Su... >>