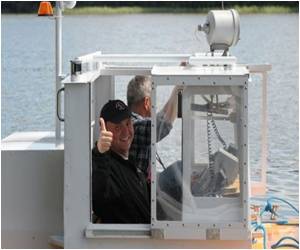 A controversial "abortion ship" belonging to a Dutch NGO docked in Morocco in secret, its organisers admitted on Thursday, after claiming the Moroccan navy had blocked its access.

"The boat has been here for several days. It arrived before the announcement" on Monday that it was sailing to Morocco, said Marlies Schellekens, one of two abortion doctors involved in the visit.

An experimental project has found drastic drop in abortion rates and unplanned pregnancies after women and teenagers in Missouri were provided free birth control.
Advertisement

An AFP journalist confirmed the boat was in the harbour, about 20 metres (yards) from the shore.


The security forces, deployed there since early morning, were restricting access to the harbour, which is located 40 kilometres (20 miles) east of Tangier.

To provide abortions to women who are exposed to grave health risks if treated domestically, a Dutch abortion boat has set its sail for Morocco, its first trip to a Muslim country.
Advertisement
Liesbeth van Tongeren, a Dutch left-wing MP who travelled to Smir for the ship's visit, explained the boat arrived earlier than the organisers said it would to avoid being stopped by the authorities.

"It was the only way of getting to the Moroccan coast," she told AFP.

Women on Waves, the Dutch group organising the trip, says the ship's visit, which they hope will last five or six days, is designed to help women induce "safe legal medical abortions," by offering them the necessary medication and advice.

At midday, up to 300 people gathered at Smir to protest against the visit.

The AFP journalist at the harbour said that, for the moment, there was no way of getting to the boat, given the heavy police presence.

Abortion is illegal in Morocco, and the health ministry said on Wednesday that the ship was not authorised to operate in Morocco, calling on the relevant authorities to prevent it from doing so.

The Dutch NGO says that between 600 and 800 illegal abortions take place every day in Morocco, only around 200 of which are done properly, with most women resorting to methods that put their lives at risk.

In the past 11 years, a Women on Waves ship has visited Ireland, Poland, Portugal and Spain, sparking protests in each country from pro-life groups.

Ordinary Moroccans have also voiced strong opposition to the visit.

"Moroccan law forbids abortion. Moroccan religious identity says it is forbidden and so does Islam. So the government cannot allow this ship to come to Morocco," lawyer Abdelmalik Zaza was quoted as saying in Al-Tajdid, the newspaper of ruling Islamist party the PJD.

Gunilla Kleiverga, a Dutch gynaecologist with the group, said the boat would not counsel or treat women in Morocco, hinting that it might transport women outside Morocco's maritime borders before doing so.

"We are only treating women in international waters. We're on a Dutch ship, where Dutch law applies. Of course we (will) adhere to Moroccan law, and we're not going to offer abortions in Morocco," she added.

Women on Waves announced the boat was travelling to Morocco on Monday, in its first trip to Muslim country, but they were secretive about its precise destination and arrival time.

Two days later they said it would arrive at Smir on Thursday at 1300 GMT, and then on Thursday morning they claimed a Moroccan warship was barring the ship's access to the harbour.

Stillbirth
News Archive
News Resource
News Category
JUUL E-Cigarettes Banned from US Market Busy Americans Get The Least Sleep At 40 Years Deepika Padukone Rushed To Hospital After Sudden Chest Pain Vegans, Vegetarians and Fish Eaters Have Better Memory Than Meat Eaters How to Reduce the Risk of Acute Kidney Injury By Drinking Coffee?
More News
Sign up for Wellness Consult a Doctor Sign up for Selfcare