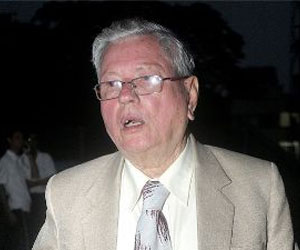 Triple Olympic hockey gold winner Leslie Claudius's son Brandon said that Leslie who was suffering from cirrhosis of the liver, was admitted to a private hospital following complications.

"He was shifted to a hospital last night following some complications. His condition is critical," Brandon said.

obesity accelerates cirrhosis progression and measures to reduce BMI could improve the prognosis for patients with advanced liver disease.
Advertisement

The 85-year-old is currently being treated at the Intensive Care Unit (ICU) of the hospital near the Eastern Metropolitan bypass in the city's southern outskirts.


A team of doctors headed by critical care specialist Sauren Panja are monitoring his condition, the hospital said.

Following abnormal fluid retention, Claudius was admitted Oct 27 to another hospital before being discharged Saturday.

In the last 11 months, Claudius has been hospitalised four times.

New study sheds light on the genetics of primary biliary cirrhosis, a chronic form of liver disease.
Advertisement
<< Smartphone Owned By Over Half of US Mobile Users
Therapy for Rare and Deadly Cholesterol Disorder Shown By N... >>