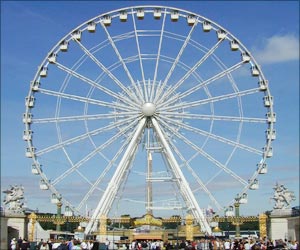 Dubai has proposed a series of mega projects reminiscent of its boom years before the downturn hit in 2009, which include theme parks and a satellite city named after the ruler.

A 210 metre Ferris wheel is set to become the world's biggest Ferris wheel after its addition on the top of the Burj Khalifa tower in Dubai, according to the country's ruler Sheik Mohammed bin Rashin Al Maktoum.

According to reports, the wheel which has been named as the Dubai Eye, is expected to dwarf the London Eye (135 m), a giant Ferris wheel situated in London, Stuff.co.nz reports.


The wheel, whose construction is expected to begin this year, is a part of an island development project worth 1.6 billion US dollars which was approved by the ruler.

Ferris Wheel: New York's New Attraction
In an ambitious attempt to draw tourists to the city known now as the 'forgotten borough', the ......

In Superstorm Sandy Devastated Staten Island Development Of World's Largest Ferris Wheel Continues Unabashed
Developers are pressing ahead with plans to build the world's largest Ferris wheel on the shoreline ...