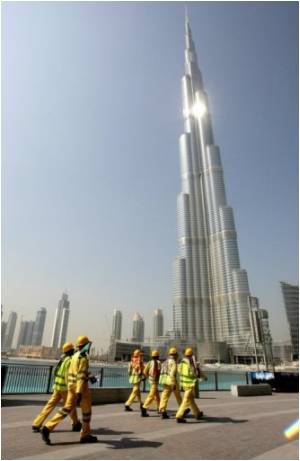 A specially modified 550,000 dollars Lamborghini Aventador, capable of speeds up to 217mph is being unveiled by the Dubai police force, what is thought to be the world's most expensive patrol car.

The sports car that is painted in green-and-white colors of the Dubai force will not likely be roaring after law breakers.

According to the Independent, instead, it will be mostly dispatched to tourist areas to show 'how classy Dubai is, 'deputy police director, General Khamis Matter al-Muzaina said.


Local media reports said the Italian-made Lamborghini Aventador is the 'crown jewel' of a wider upgrade in Dubai police wheels.

The force also is adding some American muscle car Camaros.

Lamborghini launched the car this year to celebrate its 50th anniversary and has already sold out of the marque, with several of the vehicles being sold to Britain, according to reports.

Dubai Set to Build World's Biggest Ferris Wheel Named as the Dubai Eye
Dubai has proposed a series of mega projects reminiscent of its boom years before the downturn hit ....