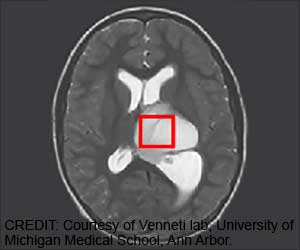 Experimental drugs designed to lower the body's synthesis of alpha-ketoglutarate extended the lives of mice harboring diffuse intrinsic pontine gliomas (DIPG) by slowing the growth of the cancer cells, according to a study funded by the National Institutes of Health.

Interestingly, they also found that artificially raising alpha-ketoglutarate levels with DIPG-causing genes may slow the growth of other brain tumors. The results, published in Cancer Cell, were part of a nationwide study that explored the cyclical role that cancer cell metabolism may play in regulating brain tumor genes.


Any genes that are buried in the spools cannot be read and are thus turned off. Cells can "epigenetically" fine tune spooling by using a process known as methylation to chemically tag histones. For years scientists knew that cancer genes often alter the metabolism of tumors.

In this study, the researchers not only found that this may be true for patients with H3K27M tumors but also that these alterations in metabolism may be part of a feedback loop involving alpha-ketoglutarate (£\-KG), that epigenetically keeps these and other brain tumors in a cancerous state.

Brain scans of H3K27M patients showed that they had higher levels of certain precursor metabolites - namely glucose and glutamine - than patients with deep brain tumors who do not carry the H3K27M mutations.

Then through a series of detailed experiments on mice and cells in petri dishes, the researchers found that H3K27M mutations induced the cancer cells to produce high levels of £\-KG and this, in turn, spurred more growth.

In contrast, they saw surprisingly opposite results in lower grade tumors associated with mutations in isocitrate dehydrogenase genes (IDH1), which naturally produce lower levels of £\-KG.

Introducing H3K237M genes into IDH1 tumors slowed growth by raising alpha-ketoglutarate levels which, in turn, increased methylation and turned off cancer-sustaining genes. The researchers concluded that understanding the intricate details behind these feedback loops may help researchers devise effective ways to treat DIPG and other brain tumors.