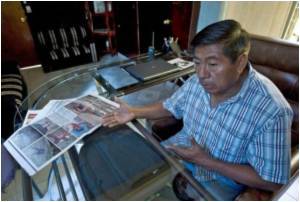 "That's what they were wearing at the moment of their capture," said an officer who took part in operations to detain the two suspects who made involuntary new fashion statements.


In Mexico City street markets fake green polo shirts sporting the slogan "London," which La Barbie wore, or the blue model worn by "JJ," sell for the equivalent of 30 dollars.

Drugs can cause side effects and toxic reactions. These reactions can be very characteristic for a particular drug. The ''Adverse Effects Finder'' is designed to help clinicians find these effects peculiar to certain drugs.
Advertisement
"It's the new 'narcofashion,' we sell a lot. People ask us for the 'Barbie' or 'JJ' model," said a woman who only gave her name as Elsa, as she sold shirts out of the back of a car.

"I think that the sales have an unhealthy side but I have to respond to demand. That's how I make my living."

Nearby, in the Ralph Lauren section of a smart department store, where a polo shirt costs 150 dollars, both models are also in high demand, sales assistants said.

Jesus Manuel, a 21-year-old cookery student, shrugged his shoulders when asked about his "JJ"-style polo shirt.

"I'm not a drug trafficker. I like the polo shirt, that's all," he said.

Meanwhile, on the Internet site "Mercado Libre," or "Free Market," around a hundred users offer to sell the models.

Around twenty of the adverts include photos of the two detainees.

"We've excluded a lot of adverts which alluded to what they call 'narcofashion.' We're constantly checking the site," said director Francisco Ceballos.

But he said millions of products were sold on the site and eliminating adverts that violate its rules takes time.

Victor Gordoa, director of the College of Public Image Consultants of Mexico, underlined that the younger drug traffickers "have been to school, are prepared for management," and that that also involves a change of style from previous generations.

"Now they're urban, they seek better places to live and smarter clothes. The criminal elite presents itself with a higher level of non-verbal communications.

"The fact that La Barbie or JJ wore a Ralph Lauren polo is an unfortunate coincidence for the brand. But it's not the only one they use."

Other brands, like Abercrombie & Fitch, have been sported by drug trafficking suspects like Vicente Carrillo Leyva, son of a former leader of the Juarez drug gang, who was arrested in April 2009.

Gordoa said the Mexican government, which is fighting an increasingly violent battle to clampdown on drug gangs, was failing to pay attention to possible messages transmitted during the presentations of drug suspects.

Authorities have to present detainees in the clothes they were captured in, which has led to some being shown in shorts and sandals.

The third to be arrested last year in a Ralph Lauren shirt, on March 7, was Marcos Carmona, also known as "El Cabrito," a suspected member of the Zetas gang.

Although he wore a bullet-proof vest, a characteristic number one on the sleeve revealed another model from the luxury brand.

Drug traffickers seem to be dictating what to publish and what to avoid to Mexico journalists reporting about the drug wars in the region.
Advertisement
<< Mexico State on Swine Flu Alert
Poor Diet in Postmenopausal Women Increases Their Risk of A... >>

Beijing Targets Bars to Eradicate Party Drugs Ahead of Olympics

Drug Side Effects Calculator Find a Hospital Drug - Food Interactions Loram (2 mg) (Lorazepam) Daily Calorie Requirements Hearing Loss Calculator Find a Doctor Diaphragmatic Hernia The Essence of Yoga Turmeric Powder - Health Benefits, Uses & Side Effects
This site uses cookies to deliver our services. By using our site, you acknowledge that you have read and understand our Cookie Policy, Privacy Policy, and our Terms of Use