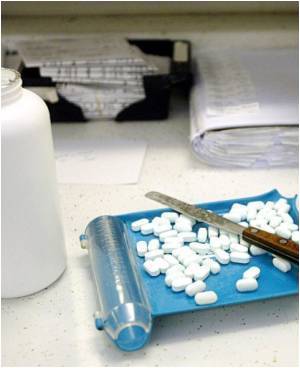 HO comes in two main forms-one that appears in children and is congenital, another that strikes wounded military personnel and surgery patients and is triggered by severe injuries and wounds.

Achondroplasia is a rare genetic disorder of bone growth that causes short-limbed dwarfism. It occurs due to mutations in a single gene called the FGFR3.
Advertisement

"There are currently no effective treatments for this disease," said study leaders Masahiro Iwamoto, and Maurizio Pacifici, developmental biologists in the Division of Orthopaedic Surgery at The Children's Hospital of Philadelphia.


"Surgeons can remove the abnormal bone masses, but surgery itself may trigger more of those growths," they added.

The congenital form of the disorder is called fibrodysplasia ossificans progressiva (FOP) and becomes manifest in children by the age of 5 or 6. While very rare, affecting an estimated 700 U.S. children, it is progressive and often fatal in young adults. Surgery cannot be used in children with FOP because it would trigger explosive HO.

One of Mother Nature's latest gifts to medical science is stirring excitement with the discovery that the substance  obtained from a coral-reef inhabiting cyanobacterium  appears
Advertisement
In the current study, Iwamoto and colleagues used retinoid agonists, a class of agents related to vitamin A, in mice that were genetically engineered to model HO. Specifically, they used nuclear retinoic acid receptor-? (RAR-?) agonists, which selectively target a regulatory pathway during cartilage formation-an essential step in the development of HO.

The RAR-? agonists prevented HO from occurring in the mice, with minimal side effects. In contrast, control mice developed HO-like bone masses. Even more encouragingly, the protective effect appeared to be permanent, persisting even after drug treatment ended.

Furthermore, the same agent blocked HO from occurring in mice that had been genetically engineered to express a mutant protein analogous to the one found in children with FOP.

The study has appeared online in Nature Medicine.

A surface molecule on bacteria that directs bone cells to die has been identified by scientists who claim that this discovery could assist in developing new treatments for severe bone disease.
Advertisement
<< Hypothermia Therapy Benefits Young Heart Patients
Cannabis Could Relieve Pain Without the High >>

Blood Pressure Calculator Color Blindness Calculator How to Reduce School Bag Weight - Simple Tips Find a Doctor Find a Hospital Accident and Trauma Care Iron Intake Calculator Pregnancy Confirmation Calculator Calculate Ideal Weight for Infants Post-Nasal Drip
This site uses cookies to deliver our services. By using our site, you acknowledge that you have read and understand our Cookie Policy, Privacy Policy, and our Terms of Use