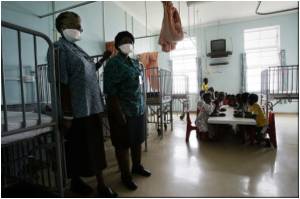 A new international research is being carried by researchers to find antibiotics against tuberculosis and fight the resistant strains.

"We want to accelerate the discovery of new compounds that can be turned into effective drugs," said Professor Tony Maxwell from the John Innes Centre, a key player in "More Medicines for Tuberculosis", a new European research project.

"The bacterium is difficult to get at," said Maxwell.


"It is slow growing, spends a lot of time hidden in cells before it makes itself known, and has very tough cell walls of its own."

Treatment is relatively long term, requiring a drug regime over four to six months. Non-compliance is a problem, exacerbating the challenge caused by resistant strains.

Respiratory diseases affect any part of the respiratory system. Some of the lung diseases like chronic obstructive pulmonary disease can lead to respiratory failure.
Advertisement
"Drug discovery research for tuberculosis is dependent on academic labs and no single lab can do it," said Maxwell.

Scientists from 25 labs across Europe will collaborate on the new project including some groups in the US and India.

The John Innes Centre scientists will focus on compounds that target DNA gyrase, a target that they have already established as effective and safe. They will receive compounds from European collaborators including AstraZeneca. They will screen those that knock out DNA gyrase. Their research will continue on those compounds that are effective both against the target (DNA gyrase) and the bacterium.

Working on new compounds to hit known targets, rather than compounds that may struggle to access bacterial cells or that may have unknown effects in humans, will provide a quicker route to clinical trials.

"Finding new antibiotics that work is only the first step," warns Maxwell.

TBVI's research partners, many of whom came together in Switzerland in early February 2011, are carefully optimistic about the past year's advances in vaccine research.
Advertisement
<< Breastfeeding Affects Intelligence
Michelle Wibowo Sculpts a Royal Cake >>

The Essence of Yoga Sinopril (2mg) (Lacidipine) Selfie Addiction Calculator Find a Hospital Vent Forte (Theophylline) A-Z Drug Brands in India Hearing Loss Calculator Drug Side Effects Calculator Diaphragmatic Hernia Post-Nasal Drip
This site uses cookies to deliver our services. By using our site, you acknowledge that you have read and understand our Cookie Policy, Privacy Policy, and our Terms of Use