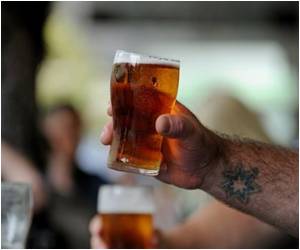 Recently, scientists have developed a compound that can help reduce harmful side-effects of 'binge drinking,' which may also pave way to treat Alzheimer's and other neurological diseases.

The key to the breakthrough was a compound developed by Professor Page and colleagues at the University of Huddersfield which has been named ethane-beta-sultam.
Advertisement

This is a taurine 'pro-drug,' an effective form of medication that easily enters the blood stream before it has been processed by the body into its active form. It is difficult for drugs to get into the brain because of the 'blood-brain barrier', the natural defence mechanism that protects the brain, but which also presents a formidable obstacle to the medicinal treatment of neurological illness.


The brain Scientists based at universities in Louvain in Belgium, Florence in Italy and Huddersfield and London in the UK, have discovered that when ethane-beta-sultam is administered to rats on a 'binge drinking' regime, it reduces the brain cell loss and inflammation that normally result from bouts of heavy binge drinking, leading to symptoms such as decreased memory.
Advertisement
These effects can cause long-term damage, particularly to teenagers, whose brains are still in the process of development. Many issues surround the prospect of a drug that masks the effects of binge drinking.

Professor Mike Page, University of Huddersfield, said that if people accept that alcohol abuse was going to continue, then it might be sensible for society to try and treat it in some way.

The study is published in the Journal of Alcoholism and Drug Dependence.

Source: ANI
Advertisement
<< Two-Thirds of Earth's Carbon may be Hidden in Planet's Inne...
Study Reveals Why Females Have Longer Lives Than Males >>

Binge Drinking in Adolescence Linked With Structural Changes in Brain
Heavy drinking during teenage years can lead to structural changes in the brain that can cause ......

Binge Drinking Linked With Increased Risk of Hypertension In Young Men
Binge drinking in early adulthood is associated with an increased likelihood of high blood pressure ...

Child's Mental Health and School Results Affected by Binge Drinking in Pregnancy
Risk of mental health problems like hyperactivity and inattention in children by the age of 11 is .....