Drivers Have to Make Right Choice When They See Yellow Lights 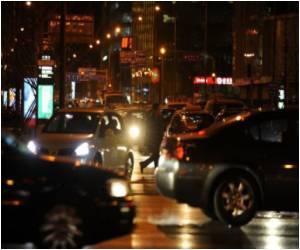 A yellow traffic light was misjudged by Hesham Rakha a couple of years ago and he entered an intersection just as the light turned red. A police officer handed him a ticket.

He's not trying to defend his action. Rakha, director of the Center for Sustainable Mobility at the Virginia Tech Transportation Institute, is describing his research. Since 2005, his research group has been studying drivers' behaviors as they approach yellow lights. Their goal is to determine signal times for intersections that are safer and still efficient.


If a driver decides to stop when instead of proceeding, rear-end crashes could occur. If a driver proceeds instead of stopping, collisions with side street traffic could occur. Although observation-based research shows that only 1.4 percent of drivers cross the stop line after the light turns red, more than 20 percent of traffic fatalities in the United States occur at intersections.

A new traffic light test could diagnose liver fibrosis and cirrhosis in high risk population, states study.
Advertisement
"If the yellow time is not set correctly, a dilemma zone is imminent," Rakha said.

"The dilemma zone occurs when the driver has no feasible choice," he said. "In other words the driver can neither stop nor proceed through the intersection before the light turns red. This can also occur if the approaching vehicle is traveling faster than the posted speed limit and/or if the driver's perception and reaction time is longer than the design one-second value."

In most cases, the yellow time is set for 4.2 seconds on a 45 mph road. The time is longer for higher-speed roads. "These timings are based on two assumptions," Rakha explains. "Namely, the driver requires one second to perceive and react to the change in signal indication and that the driver requires 3.2 seconds to stop from 45 mph at a comfortable deceleration level, assumed to be 3 meters per second squared (3 m/s2 ) or 10 feet per second squared."

For his studies, Rakha's used Virginia's Smart Road, located at the Virginia Tech Transportation Institute. The Smart Road intersection has a signal that can be controlled for length of the red, yellow and green lights. "We can study driver behavior by changing the signal when the driver is a certain distance from the intersection."

Around nine out of ten Australians say that they will back the introduction of traffic light labeling on food items.
Advertisement
<< Improved Detection of Lymph Node Metastasis in Patients Wit...
Deaths in Case Of Chronic Heart Failure Patients Sees Reduct... >>

Indian Medical Journals Post-Nasal Drip Sinopril (2mg) (Lacidipine) Find a Hospital Drug Interaction Checker Find a Doctor Hearing Loss Calculator Accident and Trauma Care Loram (2 mg) (Lorazepam) Blood - Sugar Chart
This site uses cookies to deliver our services. By using our site, you acknowledge that you have read and understand our Cookie Policy, Privacy Policy, and our Terms of Use