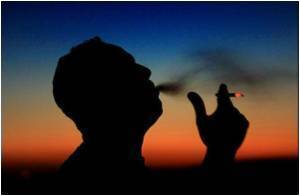 Possible prison sentences for selling cigarettes to minors are some of the first measures designed to completely eradicate smoking and tobacco use in Finland.

Finland is the first country in the world to write into its legislation that it intends not just to reduce smoking but to end all tobacco use through law.

"We realised that to state a goal of simply diminishing tobacco is a kind of approval of smoking," Ismo Tuominen, a key author of the law and a ministerial advisor, told AFP.


In the first phase, which began Friday, the possession of tobacco products by people under the age of 18 is completely banned, and it has become a criminal offence to buy or give minors tobacco, punishable by up to six months in prison.
Advertisement
Friday's new legislation also makes it illegal to buy or sell tobacco products over the Internet, to use tobacco in places frequented by minors, or smoke in spectator stands for all outdoor events.

In the next phase in 2012, it will become illegal to display tobacco products in stores, and in 2015 all cigarette vending machines will be banned.

Other countries such as Iceland and Norway have already adopted similar measures.

Tuominen however insists Finland goes much further when it comes to the wording of the legislation, which states clearly that Helsinki wants to drive out tobacco companies, although it aims to give the industry enough time to get used to the idea and find ways to disengage from the market.

The tobacco company Philip Morris has filed two complaints with the Chancellor of Justice, the country's top justice official, largely aimed at overturning the impending ban on the display of tobacco products.

Company spokeswoman Anne Edwards told AFP that Philip Morris understands its products are harmful and should be regulated, but added that it is unrealistic to think that the government can stop everyone from smoking.

"What's important for us is that we can compete for market share among adults who smoke, but how can consumers make a choice about what to buy if the products aren't visible?" asked Edwards.

Tuominen said that he does not see a total prohibition on tobacco coming into force in Finland, but that the government will certainly make it very difficult to make, advertise, buy and sell the product.