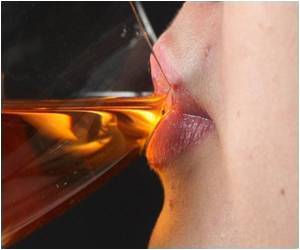 For the research a total of 83,578 female participants of the Nurses' Health Study, who were free of diagnosed cardiovascular disease and cancer at baseline, were followed-up from 1980 to 2006.

The safe permissible intake of alcohol varies legally from country to country and can be broadly classified as 8- 20 grams of ethanol per day.
Advertisement


Strokes were classified according to the National Survey of Stroke criteria.

The authors found that the risk of total stroke is significantly lower among light-to-moderate consumers of alcohol than among subjects reporting no alcohol intake.

Stroke is the third most common cause of death and the most prominent cause of physical deformity in the world
Advertisement
In comparison with non-drinkers, the estimated risk was 17-21percent lower for women averaging up to 15 grams of alcohol per day (one drink/day by US definitions of approximately 14 grams of alcohol, or two UK units of 8g).

For consumers of larger amounts of alcohol, the risk of stroke increased at levels of consumption above 38g.

Data on the pattern of drinking (regularly, binge, etc.) were not reported.

Among these predominantly light drinkers, there were no differences between effects on the risk of the most common type of stroke, ischemic stroke (due to atherosclerotic obstruction of a artery or an embolic clot) or the less-common hemorrhagic stroke (bleeding into the brain).

The results, with full adjustment for other factors that may affect risk, suggest a "J-shaped" curve for total stroke, with reductions in risk for light-to-moderate drinking and possibly an increase with greater amounts.

In this study, the point at which the risk of women having a stroke exceeding that of non-drinkers was about 38 grams of alcohol per day (about 3 typical "drinks").

The frequency of use of hormones, multivitamins, physical activity, high cholesterol, and family history of myocardial infarction were very similar across categories of alcohol intake, suggesting that the women who consumed varying amounts of alcohol were generally similar in these characteristics to non-drinkers.

The findings of lower BMI, increased smoking, greater HDL-cholesterol (good cholesterol), and lower risk of diabetes with increasing alcohol consumption were expected, and further suggest that the assessments of alcohol were reasonably accurate.

The study supports many previous reports from observational epidemiologic studies that have shown a reduction in risk of the ischemic type of stroke from moderate alcohol intake.

Some, but not all previous studies, show an increase in hemorrhagic stroke for any amounts of alcohol, but that was not seen in this study, possibly because there were few heavy drinkers in this group of nurses.

Use this calculator to estimate your blood alcohol content and the permissible limit in different countries.
Advertisement
Advertisement

Stroke can cause permanent disability and it is important to recognize its early warning signs to stop its ...
This site uses cookies to deliver our services.By using our site, you acknowledge that you have read and understand our Cookie Policy, Privacy Policy, and our Terms of Use  Ok, Got it. Close
×