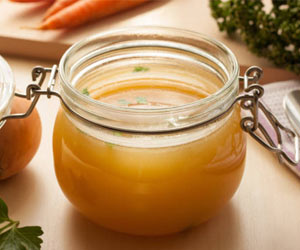 Many earlier research has validated that when animal bones are simmered in water, collagen and protein are released into the broth. Drinking the broth offers you numerous health benefits in fighting inflammation and joint pain and promoting gut health. Recent study published in Journal of Agricultural and Food Chemistry shows that ham bones contain cardioprotective peptides in them.

During cooking and digestion, proteins from animal bones can be broken down into smaller pieces, or peptides, that have different properties than the intact protein. For example, some peptides from collagen act as antioxidants or inhibitors of disease-related enzymes.
Advertisement
‘Simmering ham bones in water releases bioactive peptides into the broth, that can inhibit the activities of several enzymes involved in cardiovascular disease.’

To see if Spanish dry-cured ham bones could be a source of beneficial peptides, Leticia Mora and colleagues ground up the bones and simulated conditions of cooking and human digestion. Then, they examined whether the bone samples could block the activities of several enzymes involved in cardiovascular disease. The researchers found that the bone peptides, most of which were derived from collagen and hemoglobin proteins, inhibited the enzymes even after heating and simulated digestion. In fact, these treatments released additional bioactive peptides, suggesting that the use of ham bones to make broths and stews could have a positive impact on cardiovascular health.