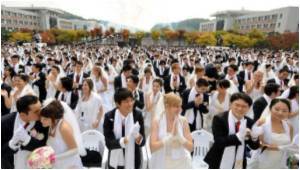 A new study has said that an increasing number of middle-aged men are opting to get married to women who are still in their child-bearing years.

The number of men aged 45-49 who wed women aged 30-34 increased by six per cent at the end of 2010, the figures from the Office for National Statistics showed.

Overall, it apparently shows that marriage - long thought to be a dying institution - is once again becoming popular.

Fiona Wood, of family law firm Pannone, asserted that the report revealed an increase in marriages where at least one spouse who had tied the knot before.

"It could be connected to the increase in the number of men aged in their late 40s who choose to marry. They might have been through a divorce but the majority do not seem to be put off the idea of marriage," she said.

Divorce can be traumatic for children and create a sense of insecurity amongst them. Couples should realize that joined parenting is important even after divorce.
Advertisement
<< UN Says Collaboration Shields AIDS Patients from TB
Introducing Vegetables into Your Child's Diet Better Than H... >>

Sleep Disorder
News Archive
News Resource
Advertisement
News Category
Tale of Love Hormones Shaping our Responses to Society How to Reduce Needle Anxiety in Children? Tobacco Addiction: Here's How to Break the Habit Parents are 'Winging It' on Their Kids' Mobile Use Ankle and Ankle Movements While Riding an Hoverboard
More News
Sign up for Wellness Consult a Doctor Sign up for Selfcare