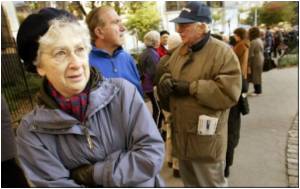 By 2100 the number of people older than 85 worldwide will increase more than previously estimated, and there will be fewer working-age adults to support them than previously expected. This prediction was made by a new statistical model.

The findings, reported by researchers at the University of Washington and the United Nations, suggest an even greater decrease in the coming decades in support for social security programs for elderly adults.

Does Routine Imaging in Low Back Pain - Do More Harm Than Good?

Routine imaging does not seem to improve clinical outcomes and exposes patients to unnecessary harms.
Advertisement

Lead author Adrian Raftery, UW professor of statistics and sociology, was surprised by how dramatically the proportion of the world's "oldest old" will increase by the end of the century.


"This has been studied a lot in developed countries, but what we see with this model is that the increase in people over 85 will be a worldwide phenomenon," he said.
Advertisement
The study will be published Aug. 20 in the online early edition of the Proceedings of the National Academy of Sciences.

The United States' ratio declines from 4.6 in 2010 to 1.8 by the end of the century. Other developed nations with low fertility rates show somewhat larger declines, including the Netherlands dropping from 4.0 to 1.6 and the United Kingdom dropping from 3.6 to 1.6 by century's end.

"The United States has more favorable numbers than other developed countries now, and will retain a slight advantage over other countries at the end of the century," Raftery said. He attributes the United States' relatively more-promising outlook to the country's higher levels of new births and to immigration.

The researchers did not produce population predictions for the 38 countries with generalized HIV/AIDS epidemics, because those nations require a different statistical method.

Standard population projection methods yield just one estimate without giving a sense of wiggle room. In contrast, Raftery and his co-authors developed a Bayesian statistical approach that produces a low and high estimate for each country's population as well as the likelihood that the actual population will fall in that range. The method makes population predictions based on countries' previous fertility and mortality rates and immigration patterns.

This probabilistic strategy allows policy-makers to make better-informed decisions, such as determining whether to build new schools.

"We don't know for sure what will happen in the future, but this model gives us a better sense of the accuracy of the projections," Raftery said.

Raftery hopes to use the model to help the United Nations make its 2012 prediction of world population growth, which will be released in February 2013.

Previously, he used a similar statistical model with the United Nations' 2010 population prediction. That model projected a world population of 10.1 billion by 2100, which is 1 billion more than previously thought.