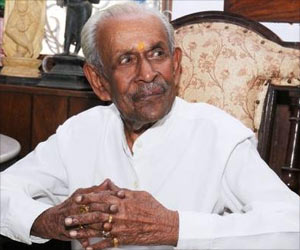 In 1970 he was honoured with the Padma Shri in recognition of his services. He was one among the first five neurosurgeons in India and also served as the Director General of Health Services.


"He was the father figure of neurosciences in the state. NIMHANS is what it is today because of his vision. It was with great difficulty that he was able to amalgamate the state mental hospital and the Central Hospital into NIMHANS," Dr D Nagaraja former Director, NIMHANS said.


Dr Varma, as a teacher, was always full of energy, not just in his speech but his entire being. "He greeted newcomers with much enthusiasm and when teaching, would start at their level and bring them up to the top," he said.

Renowned for his surgical skills Dr Varma won international honours for devising a technique to treat Parkinson's. "Although it was unimaginable at the time, the technique involved making a small lesion through the face, into the brain and by targeting a small area on the brain, stop tremors immediately," Dr Nagaraja explained.