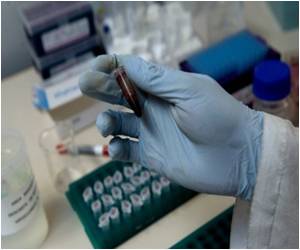 Scientists said that a large fruit bat that ranges over most of sub-Saharan Africa carries two animal viruses that pose a potential infection risk for humans.

Bats are a known source for animal viruses, including the deadly Ebola virus, that have leapt the species barrier to other mammals.

Kuwait's health ministry said it has discovered the first case of the MERS coronavirus in Kuwait and that the infected citizen suffering from MERS is in 'critical condition.'
Advertisement

In a study published Tuesday in the journal Nature Communications, scientists in Britain said two other viruses are widely carried by the straw-coloured fruit bat, Eidolon helvum.


The most widely distributed bat in Africa, the species is already known to be a "reservoir" of the Lagos bat virus, which is similar to rabies, and henipaviruses -- a group that includes the Hendra and Nipah viruses which have caused deaths among pigs, horses and humans in Southeast Asia and Australia.

A flu virus that commonly circulates among chickens but could mix with other viruses to become more dangerous was found for the first time in a human being in Taiwan.
Advertisement
But until now, there was little knowledge as to how many of the bats may be carrying the viruses.

Veterinarians led by Alison Peel at the University of Cambridge took blood and tissue samples from more than 2,000 bats in 12 countries in a bid to find out.

They discovered that the bats were genetically similar, confirming that they ranged far and wide to mate.

The species' range extends from Senegal in the west to Ethiopia and Tanzania in the east, down to South Africa.

The bat migrates as much as 2,500 kilometres (1,500 miles) over five months, and is capable of flying up to 370 kms (230 miles) in a single night. Sometimes groups of more than a million individuals can form.

The researchers also discovered that 34 percent of the bats sampled had the Lagos bat virus, and 42 percent carried henipavirus.

Why so many bats appear to be infected yet relatively few seem to fall sick is unclear.

But widespread viral infection among a wild animal species that can come into contact with humans has "potentially important public health implications," the study said.

Humans, it noted, can be exposed to the virus in several ways -- via the bat's urine or faeces, or by handling bats that are hunted and butchered for their meat.

Right now, there is no recorded instance of a human becoming infected with either virus.

But, said the authors, this could be because infections go undetected given the poor health infrastructure in many parts of Africa.

Peel said that, contrary to what many may think, the best way to avoid infection is simply to leave the bats alone.

"Sometimes a knee-jerk response can be to try and remove bats from urban areas via culling or dispersal," she said.

"However, there is evidence to suggest that actions such as this can stress the bats and lead to a greater risk of spillover (to humans)."

"The most appropriate response is ongoing studies and public awareness to avoid handling bats, and to wash the wound thoroughly if you are bitten by a bat."