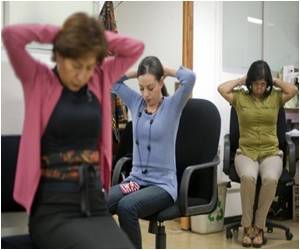 A prospective study by U.K. researchers found that adolescents who are double-jointedmedically termed joint hypermobilityare at greater risk for developing musculoskeletal pain.

They develop the pain as they get older, particularly in the shoulders, knees, ankles and feet. Findings published in Arthritis & Rheumatism, a journal of the American College of Rheumatology (ACR), indicate that children with joint hypermobility are approximately twice as likely to develop pain at these joints.


"With such conflicting evidence we set out to determine whether adolescents with joint hypermobility are at risk of developing musculoskeletal pain," explains lead author Professor Jon Tobias from the University of Bristol, UK. In a study funded by Arthritis Research UK, the team recruited participants from the Avon Longitudinal Study of Parents and Children (ALSPAC), also known as Children of the 90s. Joint hypermobility was determined at roughly age 14 by a Beighton score of 6 or more out of a possible 9. Individual joints were determined to be hypermobile if, for example, the knees could be bent backwards or the thumbs could touch the wrist. At nearly age 18, participants were evaluated for joint pain by questionnaire.
Advertisement
Analysis of participants with complete data was conducted, with 1267 boys and 1634 girls evaluated. Approximately 5% of participants were hypermobile at age 14, and at age 18 close to 45% of participants reported any pain lasting one or more days. Joint hypermobility was associated with approximately a two-fold increased risk of moderately severe pain at the shoulder, knee, ankle and foot. Interestingly, this increased risk was particularly marked in obese participants, with over a ten-fold increased risk of knee pain observed in obese participants with hypermobility, possibly reflecting the role of mechanical factors.

Professor Tobias concludes, "Our study provides the first prospective evidence that adolescents who display joint hypermobility are at increased risk of developing musculoskeletal pain as they get older, particularly in the shoulder, knee, ankle or feet. Further investigation of increased joint pain in teens is warranted to determine if the long-term effects of joint hypermobility puts them at risk for developing osteoarthritis later in life."

Source: Eurekalert
Advertisement
<< Mental Health-substance Use Services in Hospitals Up After ...
Scientists Explore Link Between Pre-natal Infection and Sch... >>

Oligoarthritis
Most parents when told that their child has arthritis find it hard to believe it, as arthritis is .....

Types of Physiotherapy
Physiotherapy is a branch of healthcare science, that mainly concentrates on the physical aspects .....