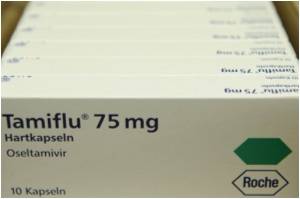 A new study confirms that Tamiflu, a treatment for influenza, offers no health benefits for patients if administered in double the normal dose.

Previous studies that found Tamiflu -- lab name oseltamivir -- is more effective if administered swiftly after infection, have prompted suggestions that patients would also do better if they are given a higher dose.

Doctors at 13 hospitals in Indonesia, Singapore, Thailand and Vietnam tested the idea on 326 patients with severe flu symptoms.


Doubling the dose did not ease the duration of the illness, diminish virus levels or alter the risk of death compared with the standard dose, they reported in the British Medical Journal (BMJ). But there was no difference in side effects, either.
Advertisement
Tests on the patients showed five strains of influenza. Most had seasonal flu or the 2009 pandemic H1N1 strain, but a small number (5.2 percent) had H5N1 "bird" flu, a highly dangerous type that causes death in nearly 60 percent of diagnosed cases.

None had the H7N9 flu that has emerged this year in China. A total of 130 people have been infected and 37 died since the H7N9 outbreak started in February.

"The findings could help to preserve oseltamivir stocks during a future pandemic... if clinicians were to prescribe only regular rather than double doses," Ian Barr and Aeron Hurt, a pair of influenza specialists at the World Health Organisation (WHO), said in a commentary

Experts Say Effects of Tamiflu Still Uncertain
Experts have warned that the safety and effectiveness of Tamiflu remains uncertain two years after ....

Researchers Urge for Release All Tamiflu Data as Promised
Roche has been urged to honour the promise it made almost three years ago to make key Tamiflu trial ...