Double-Dipping As Dangerous As Contaminated Foods! 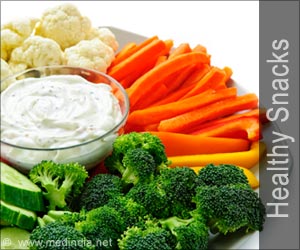 Double dipping a chip may be tasty but it may become harmful to your health, revealed a new study.

A team of researchers led by Paul Dawson, Professor of Food Science, Clemson University found that double dipping may result in bacterial transfer in unmaginable levels. They also reported that the acidity of the dip may determine the level of bacterial transfer.

Food and nutrition researchers have found that by offering a dip flavored with spices, children were more likely to eat vegetables, even vegetables they previously rejected.
Advertisement
‘Stay away from double-dipped foods as they increase the chance of food-borne illness through higher amounts of bacterial transfer.’

The team analyzed the bacterial transfer rates in three dips namely, salsa, cheese and chocolate. They found that once subjected to double-dipping, the salsa took on about five times more bacteria (1,000 bacteria/ml of dip) from the bitten chip when compared to chocolate and cheese dips (150-200 bacteria/ml of dip). But two hours after double-dipping, the salsa bacterial numbers dropped to about the same levels as the chocolate and cheese.


They suggested that it's better to stay away from double dipping as saliva in mouth contains higher amounts of bacteria which can easily spread through foods. Also, if you see people double dipping, steer clear of their favored snack.

Salsa or guacamole served in restaurants may be an important cause of food-borne diseases, according to new research.
Advertisement
<< Cognitive Behavioral Therapy Benefits People With Dental Pho...
Affordable Care Act Reduces Infertility Rates in Women With ... >>

Time to Have Healthier Options to Popcorn in Theatres

Chairman and chief executive of Sony Pictures, has urged for healthier options to eats available at cinemas.

Indian Medical Journals Loram (2 mg) (Lorazepam) A-Z Drug Brands in India Find a Doctor Diaphragmatic Hernia Accident and Trauma Care Pregnancy Confirmation Calculator Nutam (400mg) (Piracetam) Drug Side Effects Calculator Selfie Addiction Calculator
This site uses cookies to deliver our services. By using our site, you acknowledge that you have read and understand our Cookie Policy, Privacy Policy, and our Terms of Use