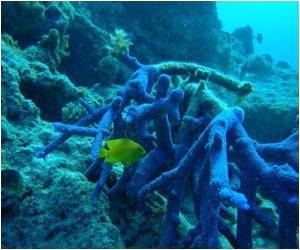 Dominant, abundant corals that have wide distributions are more likely to be affected by global climate change, researchers claim.

The team of scientists from the University of Hawaii - Manoa (UHM), Joint Institute for Marine and Atmospheric Research (JIMAR) and the National Oceanic and Atmospheric Administration (NOAA) evaluated both the geologic record of past extinctions and recent major events to assess the characteristics of dominant corals under various conditions.

They determined that during periods advantageous to coral growth, natural selection favors corals with traits that make them more vulnerable to climate change.


The last 10 thousand years have been especially beneficial for corals. Acropora species, like table coral, elkhorn coral and staghorn coral, were favored in competition due to their rapid growth.
Advertisement
This advantageous rapid growth may have been attained in part by neglecting investment in few defenses against predation, hurricanes, or warm seawater.

Acropora species have porous skeletons, extra thin tissue, and low concentrations of carbon and nitrogen in their tissues.

The abundant corals have taken an easy road to living a rich and dominating life during the present interglacial period, but the payback comes when the climate becomes less hospitable.

This density-independent mortality and physiological stress affects reproductive success and leads to the decline of corals.

Corals may Quit Warming Oceans: Marine Scientists
According to new evidence unearthed by marine scientists, corals could quit equitorial seas as the ....

Global Sunscreen Might Cool Earth, but It Won't Save Corals
A new study has determined that though an artificially 'geo-engineered' global sunscreen would ......