Dollars Go Up in Smoke! 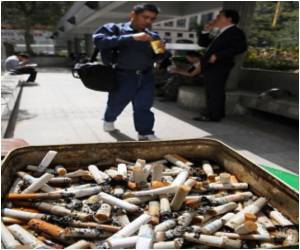 The actual and the attendant costs of a pack of cigarettes in the US total upto 18 dollars, reports a recently-released study.

Sure, the national average for a pack of 20 cigarettes is around 5.50 dollars, but that's before the cost of smoking on the US economy is factored in, the study by the American Lung Association (ALA) says.


"Smoking results in costs to the US economy of more than 301 billion dollars," the study posted on the ALA's website says.

When those costs are added to the nationwide average retail price for a pack of cigarettes, the cost of 20 smokes jumps from 5.51 dollars to 18.05 dollars, the study says, urging states to give more help to smokers trying to kick the habit.

"We urge the District of Columbia and all states to offer full coverage of clinically proven cessation treatments for smokers, which will not only save lives but also money," said ALA president Charles Connor.

Smoking is the number one preventable cause of illness and death in the United States, where tobacco use claims some 393,000 lives a year, according to the ALA.

Surveys show that 70 percent of American tobacco users want to quit, the ALA said.