Dogs and owners together in fight against obesity

Tammy, an English Shepherd, runs fast on a five-kilometer course and then lies down panting on the cool grass one warm Sunday morning.

Tammy's owner Marika Krausova said the dog was "a little chubby" at around 50 pounds (23 kilos) but has shed three pounds since starting exercise program, which included a "pack" of half a dozen dogs and their owners.


"We've been running so she has been slowly losing weight," Krausova said after she and other dog owners sweated out the course through a local park.


These canines and their owners are on the front lines in the battle for improved dog fitness in the face of what some experts see as a growing problem of pet obesity and related problems.

Dog races, boot camps, fitness session and other programs are springing up across the United States to help prevent and fight the epidemic, attributed to the same problems of weight control in humans -- a sedentary lifestyle and poor diet.

"It upsets me when people have overweight dogs," said Jeff Lutton, owner of a pet store in Alexandria, Virginia, who runs the weekend program for dogs and their owners that includes runs of various distances.

A Centers for Disease Control study in 2006 concluded that between 23 and 41 percent of American dogs were overweight, but some who work with dogs contend the figure may be higher.

Dog fitness programs and "boot camps" try to combat this by allowing canines and their owners to be their own workout partners.

Nina, a bulldog-pit bull mix on the Sunday run, "is one of the laziest dogs on earth, but being with other dogs motivates her," says owner JP Dhillon. "Running and long walks help keep her trim.

Riley's, a Border Collie-Labrador mix, has been running in the program to help cope with hip dysplasia, and in the process has pushed owner Shaunda Adams to become a better runner.

"It took us two months to complete the three miles, but how he has inspired me," she said. "Now I'm signed up to my first marathon."

Jill Bowers, founder of the Thank Dog Boot Camp in Los Angeles which gets dogs and their owners to work out together, said the animals need exercise every day and that exercising together helps both the canines and their two-legged friends

"If the dog gets on an exercise regime they have to stick with it too. It doesn't seem as much of a chore."

Many pet owners who are forced to leave their dogs at home during the day deprive the animals of needed exercise. But the owners are often tired after work, and will give the pets treats out of guilt.

"When I see an owner who is overweight you can guess the dog is overweight," said Carol Brooks, co-owner of DogOnFitness, which offers exercise programs for dogs.

"People are working longer hours, they are away from home and they are feeling guilty," she said.

Ernie Ward, a North Carolina veterinarian and personal trainer who wrote a book on dog obesity and founded the Association for Pet Obesity Prevention, said the problem requires an effort on several fronts.

"Pet obesity is now the biggest health threat to pets in the US," Ward says.

Pet exercise is important but cannot solve the problem alone without diet changes, he said.

"The key really is diet. We are now feeding our dogs a diet similar to that we are feeding ourselves," he told AFP in an interview.

"The milk bones and dog bones people give their dogs are not the same as they were years ago. The manufacturers are loading up these treats with fat and sugar. Dogs like the same things we do, so they are changing the brain chemistry of the dogs."

Ward, who speaks on the subject around the world, said the problem is not confined to the United States, with weight problems growing in Asia, Europe and Canada.

"Even in Paris and Nice you are starting to see heavier dogs and cats," he said. "If you look at who makes the dog foods and treats, the US is exporting our obesity problem."

Ward, who cites data showing 51.5 percent of US dogs and cats are overweight and 15 percent obese, said momentum to solve the problem must come from pet owners demanding healthier foods and working out more with their pets.

He says overweight and obese pets have a higher risk of developing other health problems including osteoarthritis, diabetes, heart disease and many forms of cancer.

"We think food is love, so we give the dogs treats," he said. "But the last few years of the dog's life is miserable. It's needless and it's avoidable." 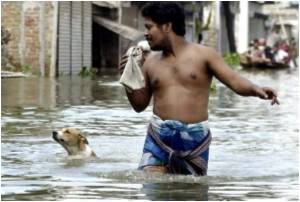 Learn About Longevity from Dogs!
Strong correlations between dog breeds' typical personalities, their age and their diet have been identified by Canadian researchers.
READ MORE