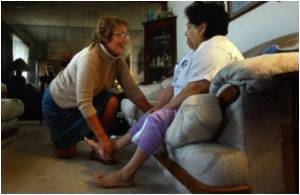 A 61-year-old diabetic man in southwestern Oregon, whose name has not been revealed, woke up from a nap on his couch to find his dog had eaten part of his foot.

He called the police who arrived to find him missing three toes and part of his foot. They also discovered the dog in the kitchen area. The man was taken by ambulance to a hospital in Roseburg, where his condition is stated to be serious.

People with diabetes can develop nerve damage called neuropathy which results in loss of feeling in the feet. In the victim the foot could have turned gangrenous and the dog may have just been removing the dead tissue. Hence, veterinarian Alan Ross says the dog should not have to go through corrective measures since it did not act 'out of meanness.'

Diabetics forfeit lots of money to manage their disease, but there is a lot more they get to lose!
Advertisement
Advertisement
This site uses cookies to deliver our services.By using our site, you acknowledge that you have read and understand our Cookie Policy, Privacy Policy, and our Terms of Use  Ok, Got it. Close
×