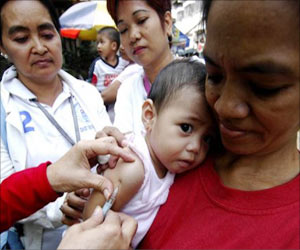 People fleeing across the Mediterranean by boat face many dangers. In 2015 more than one million people fleeing war and expulsion came to Europe.

In a paper now published in the renowned medical journal Lancet, researchers working at the Technical University of Munich (TUM)'s Klinikum rechts der Isar, Städtisches Klinikum München GmbH, and Jamaica Hospital, New York, report for the first time on acute and sometimes fatal cases of pneumonitis resulting from the ingestion of fuel. The publication is intended to raise awareness of this illness among doctors treating refugees.

It is estimated that the world's 60 million refugees may need at least 2.78 million surgeries a year, revealed a new study.
Advertisement
‘Every week the dangerous crossing of the Mediterranean claims the lives of many refugees. The wave of migration is also changing the everyday work of medical practitioners.’

Every week the dangerous crossing of the Mediterranean claims the lives of many refugees. The wave of migration is also changing the everyday work of medical practitioners. Along with the inadequate medical care in most African countries and the illnesses the refugees bring with them, the flight itself harbours life-threatening risks: human smuggling and the crossing from Libya to Greece or Italy often take place under horrendous conditions.


The risks involved in crossing the sea in rubber dinghies are well known. However, another danger has so far gone unnoticed: the ingestion of fuel. In some cases, smugglers force their passengers to take mixtures containing engine fuel in order to sedate them. The health risks are serious: Gasoline consists of aromatic hydrocarbons and can cause severe inflammation of the lungs and other types of poisoning.

With the prevalence of Hepatitis B among new refugee populations, a new study demonstrates the potential challenge posed to public health systems across Europe.
Advertisement
Symptoms resemble those of a bacterial pneumonia

A particular source of concern is the fact that the symptoms such as fever and shortness of breath initially resemble those of a "normal" bacterial pneumonia. Consequently, they often go unrecognised during medical treatment after the crossing. It is also impossible to recognise the cause and the severity of the illness in x-ray and CT images. Moreover, the symptoms often do not appear until weeks later. A further aspect is the difficulty of determining causes due to language barriers between the refugees and doctors.

After careful questioning of interpreters and patients and a joint assessment of three cases, the research team working with Dr. Christoph Spinner and Prof. Wolfgang Huber of the Department of Internal Medicine II at University Hospital Klinikum rechts der Isar succeeded for the first time in describing the suspected link between fuel mixtures and pneumonitis in refugees fleeing by boat. One of the cases was documented by a former staff member of the hospital department working in the USA. One case proved fatal.

With the publication of the report in The Lancet the authors, some of whom belong to the German Centre for Infection Research (DZIF), wish to make doctors around the world aware of this problem. The goal is to ensure better patient care with a timely differential diagnosis to enable clinical personnel to undertake more targeted treatment efforts at an earlier stage.

Refugees at Higher Risk Of Life-Threatening Illnesses in Europe

Europe has struggled to deal with the influx of refugees from Africa and the Middle East ravaged by war and poverty, where life-threatening illnesses remain widespread.
Advertisement
<< A Crusade to Stop Lung Cancer from Spreading
Role Of Anesthesia in the Mechanism of Consciousness >>

A social and emotional skills intervention developed to help children recover from the trauma of natural disasters is being adapted to help young Syrian refugees.