Doctors Find Cure to End Growth for Woman With Gigantism 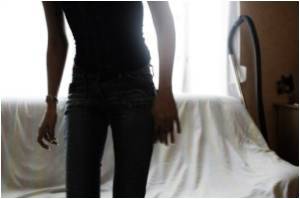 A young woman, who has been suffering from a rare form of gigantism that made her gain 336 pounds and grow to nearly 7-feet tall, has been given hope of beating the illness by doctors who have found a cure for the disease.

According to the Daily Mail, Tanya Angus, 31, from Las Vegas, Nevada was diagnosed with acromegaly, a condition causing an overproduction of growth hormone in her body that if not stopped, could kill her.

Acromegaly (Greek-enlargements of the extremities) is a hormonal disorder resulting from excessive production of the growth hormone by the pituitary gland after puberty, often referred as gigantism.
Advertisement

Before Angus developed the hormonal disorder, she said she lived like a normal teenager. But by age 20, she was well over 6 feet tall, and had size 12 feet.


"It sounds horrible, but someone at work actually asked me if I used to be a man," Fox News quoted her as saying.

"I'd started to look so big, it had raised doubts in people's minds about what sex I was," she stated.

Encyclopedia section of Medindia gives a preview about Human Growth Hormone (HGH)
Advertisement
After being forced to buy new shoes because of her rapidly growing feet, chronic pain in her back, and flu symptoms, Angus went to the doctor and was diagnosed with acromegaly.

An MRI scan revealed a tumour in her brain the size of an orange that was causing the overproduction of growth hormone.

After two successful surgeries to remove the tumour, doctors have formulated a combination of drugs to reduce her hormones back to a normal level for the first time in 13 years.

Although lower hormone levels don't mean she will shrink, Angus no longer has to worry about growing any larger.

Height and Weight by Body Frame

Calculate the ideal weight for your height and your body frame using Medindia's precise height and weight by body frame for adults.
Advertisement
<< Phenols in Peaches and Plums Can Help Fight Breast Cancer
Facebook Users Fall Prey to 'Clickjacking' >>

Gigantism
News Archive
News Resource
Advertisement
News Category
Milestone In Voluntary Blood Donation Achieved Samsung Reinvents Toilet for the Poor Which is a Better Form of Exercise: Daily or Weekly? First Phase of Foot-and-Mouth Disease Vaccination Shocking News: Polio Cases Return After a Decade in the US
More News
Sign up for Wellness Consult a Doctor Sign up for Selfcare