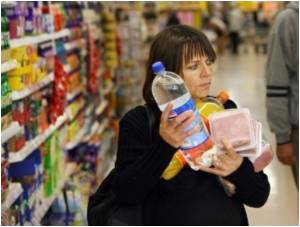 German researchers at the Else-Kroner-Fresenius Center of Nutritional Medicine led by Volker Schusdziarra have reported in the journal Nutrition that a big breakfast does not mean a loss in weight.

For long, it was believed that a big breakfast made people eat less at the other mealtimes in the day. But that was not true, for people held to the same pattern of eating when it came to other meals.  "The results of the study showed that people ate the same at lunch and dinner, regardless of what they had for breakfast," said Schusdziarra. "I always tell my patients to start reducing calories from breakfast time."

Grains make the foundation of good nutrition. The food guide pyramid shows that you need generous amounts of these foods each day to maintain health and prevent disease. Reasons? Our support group will tell you why!
Advertisement

The study that has ben reported in Nutrition, involved 300 people who were asked to record everything they ate and drank and the amount and portion sizes precisely. Big eaters and those who had small breakfasts consumed the same amount of calories at other meal times as they did at breakfast. Those who had a huge breakfast did not cut down on their lunches and dinners.


Cutting out breakfast altogether is swinging to the other side of the pendulum, and that is not a good idea too. As Sian Porter of the British Dietetic Association states, "Missing breakfast may lead you to snack on less healthy foods later on in the morning and you won't necessarily catch up nutritionally later in the day if you skip breakfast. Other benefits of breakfast include improved health, improved mental performance and concentration and better mood - something we all want in the morning."

So, eat a healthy breakfast every morning. Just don't overdo it.

Eggs are packed with a rich source of nutrients that supply the essential requirements needed to start an energetic day.
Advertisement
<< Foods That De-Stress
Fertility Screening Prevents Births With Gene Disorders >>