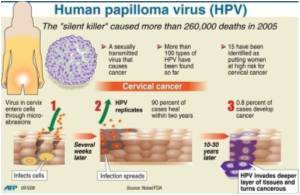 A community-based study in Mexico has revealed that HPV DNA testing for precancers and cervical cancers is over 50 per cent more sensitive than cytology testing for the same conditions.

Results of the largest HPV DNA primary screening study ever to be performed in a Latin American country point to the readiness of HPV DNA testing for large-scale implementation in Mexico and are published online today (8 July 2010) in Cancer, Causes and Controls.


Attila Lorincz, Professor of Molecular Epidemiology at Barts and The London School of Medicine and Dentistry is among researchers behind the study which involved over 50,000 women, aged 20-70, undergoing routine cytology and high risk (HR) HPV DNA testing. All those who tested positive through cytology were referred to colposcopy, while the HPV DNA positive women were followed by repeat HPV DNA testing with colposcopy if they were repeat positive in one year. The study is a pilot implementation to determine the real world performance of routine HPV DNA testing and routine cytology testing in the Mexican IMSS health insurance system.

Overall the sensitivity of HPV DNA testing for precancers and cervical cancers was 93.3 per cent versus only 40 per cent for cytology testing.

Professor Lorincz said of the results: "The data confirms that HR-HPV DNA testing is much more sensitive than cytology and that HPV testing also identifies women with high risk of serious cervical disease in an efficient and medically acceptable manner.

"The advantage of this new cervical cancer screening approach is that women who are HPV DNA positive can be quickly referred to colposcopy (within one year), thus catching the vast majority of the precancers and cancers. In contrast women who are HPV DNA negative can be safely made subject to much longer screening intervals (5 to 10 years) saving considerable costs for the Mexican health system. "

Paternity Testing - Whose Baby Is It Anyway?
Paternity testing involves DNA studies that are carried out under certain circumstances to establish the paternity of a child.
READ MORE

DNA Finger PrintingGenetic Testing of DiseasesEpigeneticsPaternity Testing - Whose Baby Is It Anyway?Oxidative Stress / Free Radicals Cell Injury
Sign up for Wellness Consult a Doctor Sign up for Selfcare