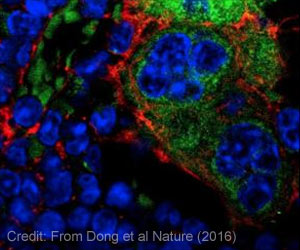 Many cancer-driving mutations are "cell-autonomous," meaning that the change in a cell's DNA makes that same cell grow more rapidly. In contrast, an indirect neighbor cell effect was observed in a mouse model of Noonan syndrome, an inherited disorder that increases the risk of developing leukemia.

Noonan syndrome is a genetic disorder that affects different parts of the body. It is caused by changes in one of various autosomal dominant genes.
Advertisement
‘Maraviroc (FDA approved drug to combat HIV infection) and BX471 (which is under development for multiple sclerosis) have shown to dampen the cancer-driving neighboring effect in patients with Noonan syndrome.’

The findings are scheduled for publication in Nature.


The neighbor cell effect could be frustrating efforts to treat leukemias in Noonan syndrome patients. That's because bone marrow transplant may remove the cancerous cells, but not the cause of the problem, leading to disease recurrence. However, the researchers show that a class of drugs can dampen the cancer-driving neighbor effect in mice. One of the drugs, maraviroc, is already FDA-approved against HIV infection.

Noonan syndrome is a rare genetic disease. It presents with a set of pathologies including heart, facial and skeletal alterations, pulmonary stenosis and short stature.
Advertisement
Noonan syndrome often involves short stature, distinctive facial features, congenital heart defects and bleeding problems. It occurs in between one in 1000 to one in 2500 people, and can be caused by mutations in several genes. The most common cause is mutations in the gene PTPN11. Children with Noonan syndrome are estimated to have a risk of developing leukemia or other cancers that is eight times higher than their peers.

"Our research highlights the importance of the bone marrow microenvironment," says Cheng-Kui Qu, MD, PhD, professor of pediatrics at Emory University School of Medicine, Winship Cancer Institute and Aflac Cancer and Blood Disorders Center, Children's Healthcare of Atlanta. "We found that a disease-associated mutation, which disturbs the niches where blood stem cell development occurs, can lead to leukemia formation."

"We have identified CCL3 as a potential therapeutic target for controlling leukemic progression in Noonan syndrome and for improving stem cell transplantation therapy in Noonan syndrome-associated leukemias," Qu says.

Qu's team had started out intending to investigate the effects of PTPN11 mutations in the nervous system. The team developed genetically engineered mice that altered PTPN11 in neural cells, and saw that the mice all developed an enlarged spleen and a condition resembling myeloproliferative disorder (too many monocytes) at an early age.

It turned out that their mice had also changed the PTPN11 gene in mesenchymal stem cells, but not blood stem cells. The myeloproliferative disorder in the PTPN11-mutant mice can be treated in the short term by bone marrow transplant, but it comes back within months.

The research team showed that drugs that counteract CCL3 dampen the myeloproliferative disorder in the mutant mice. One of them is maraviroc, which has been FDA-approved to combat HIV infection, and another is BX471, which was under development for multiple sclerosis. The authors caution that other Noonan syndrome mutations, in genes besides PTPN11, need to be assessed for their effects on leukemia formation.

The boom in the new cases of genetic disease Noonan Syndrome has now been explained by the scientists at USC; a gene mutation that increases the production of the father's sperm that is diseased
Advertisement
<< N-acetyl-cysteine Drug may Help Prevent Age-related Health ...
New Way Developed to Determine the Strength of an Immune Re... >>

genetic mutations and these mutations may be small, affecting just one gene or affecting entire chromosomes. Such mutations may develop spontaneously or they may be inherited from either parent. The consequences of such genetic disorders can vary greatly and very often the extent to which a genetic condition affects the person will be influenced by environmental factors as well. Test your knowledg

Loram (2 mg) (Lorazepam) Accident and Trauma Care Calculate Ideal Weight for Infants Noscaphene (Noscapine) The Essence of Yoga Find a Doctor Blood - Sugar Chart Drug Interaction Checker Vent Forte (Theophylline) Blood Donation - Recipients
This site uses cookies to deliver our services. By using our site, you acknowledge that you have read and understand our Cookie Policy, Privacy Policy, and our Terms of Use