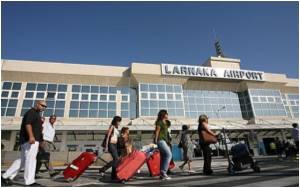 A ten year old dispute over the control of Cyprus airspace may be a risk for safety, amid increasing air traffic over the divided resort island.

The Greek Cypriot head of Nicosia Air Traffic Control, which under international law is responsible for supervising the airspace over the island as well as a large slab of the adjacent eastern Mediterranean, says there have been near misses and that the number of incidents is growing.

With one of the toughest smoking bans in Europe, Cyprus will ring in the New Year on Thursday night with a ban on indoor smoking in pubs, clubs and cafes.
Advertisement

The rival Turkish Cypriot aviation authorities, who oversee flights between Turkey and the breakaway north of the island and claim jurisdiction over the surrounding airspace, acknowledge there is a problem but say the cause is the Nicosia controllers' refusal to talk to them.

"We had a very, very serious case about 18 months ago," Antoniades told AFP.

Several farms on the eastern Mediterranean island of Cyprus have been cordoned off after a suspected outbreak of foot and mouth disease, Agriculture Minister Photis Photiou announced on Friday.
Advertisement
"There was a Russian flight coming from the Egyptian airspace, flying through Nicosia to Turkey, to go to Russia, and then we had another flight coming south.

"Because of the intervention of Ercan, there was a near collision when one of the two pilots requested a different level," he said referring to the airport in the breakaway north where Turkish Cypriot controllers are based.

Due to the expansion of air traffic, he said his staff was working overtime to maintain safety in the area.

There are no flights across the UN-patrolled buffer zone that has divided Cyprus ever since Turkish troops occupied its northern third following a Greek Cypriot coup in 1974.

"Generally speaking, the two sides have been respecting the no-fly zone over the buffer zone and have not committed any significant violations in recent years," UN spokesman Rolando Gomez said.

"However, on occasion there have been some aircraft from both sides that have strayed close to the buffer zone largely as a result of pilots becoming disorientated."

Antoniades said the risks of disorientation among pilots unfamiliar with the "weird situation" regarding the island's airspace was one of his biggest concerns.

The Nicosia Flight Information allocated by the UN International Civil Aviation Organization covers a 173,000-square-kilometre (66,800-square-mile) area of the eastern Mediterranean and controls overflights serving a large number of countries.

When aircraft cross the Ankara-Nicosia FIR boundary, they are directed by Ankara to change frequency to Ercan, creating a confusing situation of "double control" for Nicosia air traffic controllers, Antoniades said.

"You don't know the intentions of the air traffic because they are not talking to you," he told AFP.

"It's like having someone blindfolded walking round with other people in the room. Eventually there is a serious risk he's going to hit someone."

But for Turkish Cypriot air traffic controllers it is not pilots' failure to contact Nicosia Air Traffic Control that creates the problem but their Greek Cypriot counterparts' refusal to deal with them, despite the rising volume of traffic into Turkish Cypriot airports.

"It would be technical cooperation for flight safety, it would not have a political aspect."

Topaloglu said that currently the only way the two sets of air traffic controllers could coordinate was by listening into each other's radio transmissions.

"We do not have direct contact but we monitor each other's frequencies. We are ready for cooperation with southern Cyprus but they reject it," he said, adding that his staff sometimes heard obscenities about Turkish Cypriots on the Nicosia frequency.

Topaloglu dismissed allegations his controllers were not up to the job.

"In the early hours of the morning on June 26, 2010, a Malaysian plane and a Turkish ambulance plane averted danger at 36,000 feet (11,000 metres) off Paphos (a Greek Cypriot airport in the southwest of the island)," he said. "It was Ercan air traffic control centre which helped overcome this danger."

Topaloglu said that Greek Cypriot authorities needed to accept the reality that two million passengers a year used Turkish Cypriot airports, between 35 and 40 percent of them EU citizens, some of them Greek Cypriots.

"Nobody can ignore Ercan," he said.

Resolving the problem is one of the issues being addressed in long-running UN-brokered talks between the leaders of the two sides aimed at resolving the island's division once and for all.

"The two sides exchanged views on the Flight Information Region in Cyprus in their meetings in January and February this year... which amounted to a very constructive dialogue," the UN spokesman said.

But he warned that air traffic control and the wider question of the island's future governance under a power-sharing deal was just one of six sensitive issues being addressed in the talks, which have been going on since September 2008, and was not going to be resolved overnight.

"At present, the two leaders are discussing the property question," Gomez told AFP.

"For the time being, it is unclear when the issue of air traffic control, or rather the Flight Information Region, will be revisited in the current talks."

The Cyprus parliament voted by a large majority on Thursday to make the Mediterranean holiday island the latest EU country to ban smoking in bars, restaurants, nightclubs and workplaces.
Advertisement
<< Heat Waves Cause Great Trouble to Russian Farmers
Professional Vodka Tasters Have to Keep a Strict Regimen >>

Breast is Best for Cyprus Women in Feeding Record Bid