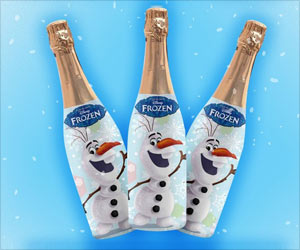 A frozen-themed non-alcoholic drink for children, which is sold in a champagne-style bottle is to be discontinued after alcohol awareness campaigners in the UK said that the product could encourage underage drinking among young children.

Currently, the drink is on sale in UK discount store Home Bargains. It is described as a "grown-up alternative to juice and pop at parties" aimed at "little princes and princesses across the land who want to be more sophisticated" on the retailer's website.

An alcohol awareness campaign has been launched recently for women inspiring them to evaluate their drinking and how it could be affecting their health.
Advertisement
‘Disney's Frozen style drink will no longer be produced from April 2016 as it could encourage children to drink alcohol.’

Alcohol awareness groups expressed concerns that the product could normalize alcohol consumption, which could make children want to experiment with alcohol.


"Too often alcohol is sold as if it was a normal commodity and alcohol-like products are used to entice people into the world of alcohol," Jackie Ballard, Chief Executive of Alcohol Concern told Mashable.

Teens Giving Up On Cigarettes, Alcohol for Fruits, Veggies

Only a small minority of under-16s has ever tried an alcoholic drink or a cigarette and almost a quarter now eat five portions of fruit and vegetables a day.
Advertisement
"This is particularly worrying when products are aimed at children, who we believe should be entitled to an alcohol-free childhood, away from the marketing pressures faced daily by adults."

"Young people's bodies are still developing and their brains may be more susceptible to the effects of alcohol than those of adults, even at levels within the government's recommended upper limits for adults," Dr Jarvis continued.

A spokesperson for Disney said in a statement, "We have recently been made aware of the Vitpress Disney Frozen Non-Alcoholic Party Drink, a licensed product that originates in Poland."

"As we set very high standards for the quality of products bearing the Disney name and characters, we have informed the manufacturer that we will no longer license Disney images to a product that is packaged to look like alcohol."

The Disney spokesperson announced that the product will no longer be produced from April 2016 and that measures were being put in place to ensure that this does not happen again.

Operations director Joe Morris said, "We are committed to ensuring that our alcoholic products are not sold to underage drinkers. All staff members are trained to request ID from any customer attempting to buy alcohol that looks under the age of 21."

Ireland has one of the highest alcohol consumption rates, averaging 11 liters per capita for 2014 according to Organization for Economic Cooperation and Development (OECD) estimates.
Advertisement
<< Ultrasound May Be Used As a Supplemental Test To Detect Brea...
Cancer Survivor Denied a Smear Test Because She's 'Too Young... >>

Total Alcohol Ban to be Implemented Soon in Bihar: Excise and Prohibition Minister

The total ban will be implemented from April 1, 2016 and it is applicable for country-made liquor as well as foreign-made liquor.