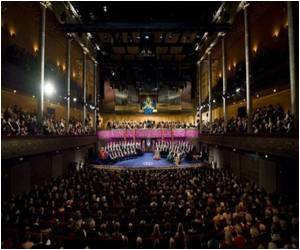 Amid expectations, the Nobel season begins with speculations that the physics prize could honour the discovery of the "God Particle", while a Pakistani girl who was shot and nearly killed by the Taliban could receive the peace prize.

The breadth of the field of candidates exemplifies how the Nobel Prize, seen by many as the planet's most prestigious award, recognises both intellectual struggle with the fundamental riddles of nature -- and real battle against violations of basic human rights.

But it is the award for groundbreaking medical research that will be the focus of attention Monday at about 0930 GMT, when Goeran K. Hansson, secretary of the Nobel Committee for Physiology or Medicine, steps in front of the cameras at Stockholm's Karolinska Institute to announce this year's winners.


Only on Tuesday will it be clear if predictions are correct and the discovery of the Higgs Boson? widely hailed as one of the greatest scientific achievements of the past century? gets the Nobel Prize for Physics.
Advertisement
Without the Higgs, say theorists, we and all the other joined-up atoms in the universe would not exist.

Despite this, there is some conjecture that the Higgs will miss out. Officially, there remains a remote possibility that the new particle discovered last year is not a Higgs but some other novel particle.

Awarding the prize for the Higgs also poses a conundrum for the Nobel Committee: Should theoreticians or practitioners -- or a hard-to-decide mixture of both -- be on the podium? And how to reward a breakthrough that took the efforts of thousands of individuals?

Maria Gunther Axelsson, science editor at Swedish daily Dagens Nyheter, predicted that the prize would probably go some way towards recognising the collective nature of the effort that was behind the breakthrough.

"Francois Englert (from Belgium) is an obvious choice since he, along with Robert Brout, who died in 2011, was first to publish the theory behind the Higgs field," she wrote in the paper's Sunday edition.

"Fabiola Gianotti (of Italy) and Joseph Incandela (of the United States) will share the other half of the prize, because they were first to come up with the experimental results," she forecast.

A record 259 nominations have been submitted for this year's peace prize but the Norwegian Nobel Institute never discloses the list, leaving amateurs and experts alike to engage in a guessing game ahead of the October 11 announcement.

Malala, the Pakistani teen who survived a shot to the head last year by the Taliban for championing girls' education, tops the list at bookmaker Paddy Power with odds 2-to-1.

But observers have cautioned that giving the award which comes with a sum of money to a girl who is only 16 could be unsuitable.

"I'm not sure it would be suitable, from an ethical point of view, to give the peace prize to a child," Tilman Brueck, the head of Stockholm peace research institute SIPRI, told Norwegian news agency NTB.

Other favourites at Paddy Power include Congolese doctor Denis Mukwege and Bradley Manning, a former US soldier who passed on massive amounts of information to WikiLeaks.

For the Nobel Prize for Literature, bookmaker Ladbrokes had Japanese author Haruki Murakami as the favourite with 3-to-1 odds, followed by US novelist Joyce Carol Oates at 6-to-1, Hungary's Peter Nadas at 7-to-1 and Norwegian author and dramatist Jon Fosse at 9-to-1.

In tune with tradition, the exact timing of the literature prize was still not announced as of late Sunday.

As for the Prize for Chemistry, to be unveiled Wednesday, no clear winner was in sight. Lena Nordlund, a science journalist with Swedish radio, said she had an extra hard time this year coming up with an obvious winner for the prize in chemistry.

"I suggest that Svante Paabo, a Swede in Leipzig who researches ancient DNA, especially from Neanderthals, could get the chemistry prize," she said.

The Nobel Prize for Economics, to be announced October 14, is usually dominated by academics from US universities, and this year's list of frontrunners has a similar American bias.

Among the likely winners are Robert Barro, a macroeconomist with Harvard, and Stephen Ross, a financial expert from the Massachusetts Institute of Technology, according to Hubert Fromlet, a Swedish professor in international economics with a history of making the right guesses.

However, non-US economists such as Jean Tirole, a specialist on microeconomics from the Toulouse School of Economics, also have a chance, according to Fromlet, who was speaking to the Swedish paper Svenska Dagbladet.

To Aid Future Discoveries 'God Particle' Big Bang Machine to be Revamped
A revamp is being carried out by engineers to help the world's largest and most powerful atom ......

Link Between Nobel Prizes and Milk Consumption Identified
Nations that consume a lot of milk tend to have a lot of Nobel laureates among their populations, .....