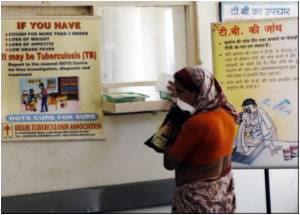 The discovery of a completely drug-resistant strain of tuberculosis in the Indian city of Mumbai has rung alarm bells among medical practitioners and authorities worldwide, especially those working in TB prevention.

The World Health Organisation itself is known to be organizing a meeting to assess the evidence and decide what to do next.

This strain of TB, called Multidrug-resistant (MDR) TB, is resistant to all of the main TB drugs and may raise a situation where patients have nothing but their immune system to help fight off the disease.

Tuberculin skin test and Interferon - Release Assays are tests used to screen for tuberculosis.
Advertisement
Although Indian cases have been reported for the first time, it was reported in Italy in 2007, where it affected two patients. Then in 2009, 15 patients were reported in Iran.

"We currently have 12 confirmed cases, of which three are dead," New Scientist quoted Zarir Udwadia of the Hinduja National Hospital and Medical Research Centre in Mumbai, as saying.

What compounds the problem for India is that the strain has been found in a congested city like Mumbai, where it could spread very quickly.

"It's estimated that on average, a tuberculosis patient infects 10 to 20 contacts in a year, and there's no reason to suspect that this strain is any less transmissible," Udwadia said.

According to him, the only thing that can be done is to keep the patients in isolated wards in hospitals so that they don't infect anyone else, but that is an impractical solution.

Udwadia blames poor management of MDR over the years for the current situation.

While the usual strain of TB has been covered very well in India's national programme, the same level of support and treatment was not provided to MDR-TB patients, with cost being a major factor for this.

"Years of mismanagement of MDR-TB at government and private care levels resulted in amplification of the level of resistance till we finally ended up with this untreatable strain," Udwadia said.

Paul Nunn, coordinator of the STOP TB department of the WHO in Geneva, agrees with the assessment and calls on governments to provide better support, regardless of the cost.

"It's a wake-up call for countries to accelerate provision of proper care, particularly for multidrug-resistant patients," he said.

Selfie Addiction Calculator Find a Hospital Sanatogen Accident and Trauma Care Calculate Ideal Weight for Infants A-Z Drug Brands in India Pregnancy Confirmation Calculator Hearing Loss Calculator Find a Doctor Drug Interaction Checker
This site uses cookies to deliver our services.By using our site, you acknowledge that you have read and understand our Cookie Policy, Privacy Policy, and our Terms of Use  Ok, Got it. Close
×