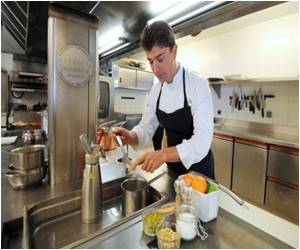 Much of what elBulli chef Ferran Adria and his team created across their nearly 2,000 dishes from foie gras noodles and liquid olives to air baguettes and mimetic peanuts defies transcription.

Two years after closing the beachside Spanish restaurant -- repeatedly lauded as the world's best by those lucky enough to have dined there -- Adria says he is now focused on preserving its legacy for future generations.

Widely regarded as the world's best chef and credited with having changed culinary history by reworking familiar ingredients into unfamiliar dining experiences, Adria, 50, is now turning his attention to cyberspace.


He plans to impose a sense of chronology to food online with his "La Bullipedia" project, a curated database into which he aims to incorporate every piece of gastronomic knowledge available. Like his culinary creations, it is highly ambitious.
Advertisement
"The thing about the Internet is that it's not in order," he said in an interview in Hong Kong.

"We don't have an order of what has existed in cuisine. Today you search for "white asparagus" and in English you have something like 1.5 million websites. Imagine how many you get in all languages."

Adria was in Hong Kong last week to oversee a Sotheby's auction of wines from elBulli, while a bid of nearly $30,000 won the chance to dine with him in his hometown of Barcelona. "I'll probably take them to the football as well," he joked beforehand. Another auction will take place in New York towards the end of the month.

Proceeds will go to the elBulli Foundation, the chef's new non-profit research foundation, which is set to launch next year and is aimed at further developing his trailblazing approach to cooking. At the centre of it, he says, is the La Bullipedia project, which has been backed by Telefonica Digital and is scheduled to go live in 2015.

"We are taking fundamental aspects of digital technology such as algorithms and data and applying it to food," he wrote on the BBC website last year.

"We are putting the combined knowledge of elBulli online where people can adapt and modify it, and draw inspiration from some of the most innovative recipes ever created," he wrote.

"It's a tool that gives information and knowledge. Then the cook puts in the soul," Adria told AFP.

"Take the chocolate tart as an example," he said.

"What are the best examples of chocolate tarts that led to the tart's evolution? To create a new concept you have to have the information. Because if you don't have that information, that's when you end up copying."

Adria, who joined the kitchen staff of elBulli in 1984, rocked the world of gastronomy by using science to "deconstruct" and rebuild food into new textures, contexts and experiences.

The Michelin three-star elBulli was open for only six months of the year. It had one daily dinner seating offering a degustation menu of some 40 small dishes at around 250 euros ($320) per head.

Each year about 8,000 diners were selected from a lottery system subscribed to by more than a million.

Britain's Restaurant magazine ranked elBulli number one on its list of the world's top 50 restaurants a record five times -- in 2002 when the list was first published and between 2006 and 2009.

"The legacy of elBulli was a way of understanding life," Adria told AFP. "Chefs move around so often that it will be easy to transmit this legacy around the world. They are mentors to other chefs, those chefs to others and so on."

Indeed -- part of Adria's Hong Kong visit was also to lend his support to his protege Alain Devahive Tolosa, who spent a decade in the elBulli kitchen and also worked in its food research laboratory. Tolosa has brought his Catalunya restaurant to the city after opening in Singapore last year.

"I'm very happy to see that Spanish cuisine is getting the recognition it deserves in Asia. Tapas cuisine is very similar to Chinese cuisine, it is made to share," Adria said.

Innovation, he says, will remain at the heart of everything he does, but it will be increasingly assisted by the power of digital technology.

"The world is changing super-fast, all concepts are changing. Thanks to the Internet, systems like the Michelin star will have changed completely in ten years," he said.

Food blogs -- which have come to dominate Asia's gastronomical discourse in particular, turning diners on to new foods and giving small eateries valuable exposure -- have helped fuel a democratisation of food reviews, he said.

"Bloggers are just as important as Michelin stars, especially locally. If I (one day brought a restaurant) to Hong Kong, I'd feel more confident if I had two good reviews by bloggers than a good write-up in a guide," he said.

"But at the end of the day, everyone has to try to do things well. If you perform well there can be no problem."

10-Tonne Hummus Victory In Lebanon-Israel's Gastronomy Wars
Lebanon on Saturday claimed another victory in the continuing battle with Israel over which country ...