Laiba, all of seven , stands as a testimony for the thousands of Pakistanis who have lost limbs in the war between Islamist militants and the armed forces.

The girl, whose name means "Fairy of the Heavens", was shopping in Peshawar with her uncle for a new pair of socks for the Muslim festival of Eid in November 2008 when tragedy struck. 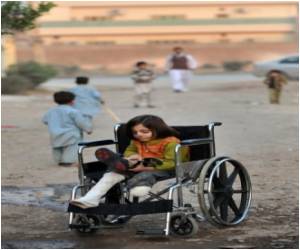 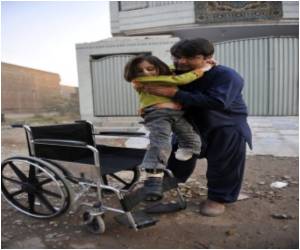 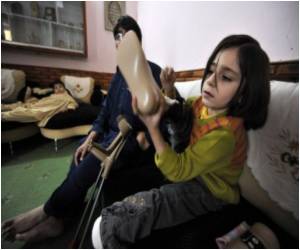 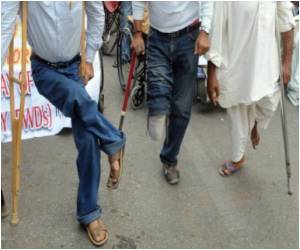 Their car was travelling alongside a convoy of the paramilitary Frontier Constabulary. Mistaking them for potential suicide bombers, her father says, troops raked the vehicle with gunfire, shattering Laiba's left leg.


Doctors could not save her foot and her leg was amputated mid-shin. Her right leg, despite five major operations, is still embedded with shrapnel.

Now, Laiba lies in bed at her grandfather's house in Peshawar, capital of North West Frontier Province, playing with an artificial foot, shy and silent after her trauma.

"It is strange to be scared in our own country of our own people," said her mother, Razia Khan.

"If we escape from suicide attacks, our own forces fire shots on us. I get afraid when any of my relatives leave the house."

Although the government does not keep statistics, doctors estimate thousands of people have lost limbs in a wave of attacks and suicide bombings blamed mostly on Taliban militants that have swept the country since July 2007.

The attacks have killed around 3,000 people. Civilians have also been caught in crossfire since Pakistan joined the US-led "war on terror" in 2002 and launched offensives against Islamist strongholds in the northwest.

There are no figures for civilians killed or wounded in army offensives, most of which occur in the northwest region along the Afghan border -- lawless, rugged terrain largely out of bounds to journalists and aid workers.

Laiba's family said they encountered a wall of silence when trying to get justice for their daughter.

"Police registered the first information report against 'unknown people', despite the fact that everything was clear," says her father Asim Khan, a supervisor at the Pakistan Telecommunication Corporation in Islamabad.

"I want them to accept responsibility and pay for the treatment of my daughter," he said.

The family has been able to drum up public support for Laiba's cause, with TV channels and newspapers reporting her plight and human rights groups intervening.

Frontier Constabulary (FC) authorities acknowledged that Laiba was injured and paid about 400,000 rupees (4,700 US dollars) for treatment, Khan said.

But because she is growing, Laiba will need a new artificial limb every six months to have any hope of living a normal life.

The family cannot afford the 91,000 rupees (1,076 dollars) for each new prosthetic -- although Laiba's mother works in Britain for the National Health Service and the family is better off than many in Peshawar.

"I don't want any revenge, no compensation, but only the treatment of my daughter from the best physicians of the world. The security forces must do it," says Razia Khan, who travels back and forth between Britain and Pakistan.

Major Fazl-ur-Rehman, a spokesman for the FC, told AFP an internal inquiry found that the shots which injured Laiba were not fired by their troops but by "various other forces moving there."

"Even then we paid for her treatment and offered to buy her an artificial foot purely on humanitarian grounds," he added.

Militants appear to be increasingly targeting civilians. A suicide blast killed 101 people at a volleyball game in a northwest village on January 1. On October 28, a car bomb slaughtered 125 people in a crowded Peshawar market.

The massive amounts of explosives packed in cars, trucks or suicide vests, sometimes studded with nails and other makeshift projectiles, cause horrible injuries.

The Pakistan Institute of Prosthetic and Orthotic Sciences in Peshawar treats more than 6,000 amputees every year and numbers are increasing, says managing director Liaquat Ali Malik.

"The number is increasing day by day due to this war on terror. We receive dozens of people every day who want artificial limbs but treatment is an ongoing and lengthy process," he told AFP.

Patients need to replace artificial limbs every two years, which is costly and few amputees can afford it, Malik acknowledged.

Anser Abbas, a journalist, lost both his arms in a suicide bombing that killed 20 of his relatives at a hospital in northwest town Dera Ismail Khan on August 19, 2008.

He was transferred to an intensive care unit in Islamabad and had a series of painful operations and treatments in the past year and a half, at the cost of 1.5 million rupees to his family.

The promised government compensation never came, and he remains without artificial arms which could give him some independence.

"I can't eat, dress, drink and write with my own hands. I have become disabled after the blast, the Taliban have destroyed my life," he said.

Arshad Abdullah, a member of the provincial cabinet of North West Frontier Province, said the government pays compensation to bomb blast victims for severe injures on the recommendations of a medical board.

"We pay compensation within 15 days. If someone has been left without it, it is serious and criminal negligence on the part of government officials. I will look into this and take stern action," he told AFP.

Taliban Bombs Drain Pakistan Party Spirit
When Sara Qaiser celebrated her wedding, her dream day was attended by armed guards and guests who had been frisked by Pakistani soldiers.
READ MORE

Scorching Heat, Not Talibans, Number One Enemy For Soldiers In Afghanistan
After hours of ferocious fighting in southern Afghanistan, the two young US Marines desperately needed emergency medical care - and it was the heat, not the Taliban, that had finally defeated them.
READ MORE

Taliban Shave Pakistanis Heads, Moustaches for Listening to Music
Taliban militants in northwest Buner district shaved the heads and moustaches of four Pakistani men as punishment for listening to music, according to one of the men.
READ MORE